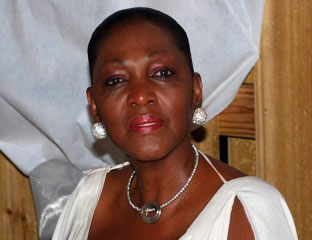 Married with a young daughter, Joan studied Health Care administration while living in Brooklyn.  She moved on to Miami and went back to school for Pre Med Degree.  She went on to work for North Shore Hospital, where she has been for more than thirty years and  was given the highest honor as the Tenet Health Care Hero of South Florida.

In 1985, in Miami Carnival’s first year, Joan Hinkson was a member of the St. Lucia Association of South Florida Inc., which produced a mas band.   Joan started off by being just a regular masquerader.  But Joan was never just a regular person, so in no time at all, she was the Queen of the Band.

In 1988 the Bandleaders Association of South Florida was formed, and Joan became a member and, quickly, a member of the Executive.

In 1990, when the Bandleaders decided to produce their own Carnival – moving away from the then-organizers of Miami Carnival, Joan was a part of that movement.

In 1991, the Caribbean American Carnival (CAC) organization was formed by Selman Lewis and Joan was one of those invited by Selman to be an integral part of CAC.

From 1990 to 1999, when Miami Carnival was formed, Joan remained with CAC – fulfilling various functions and slowly learning more about the promotion and administration of Carnival.

At the same time, Joan and Martin Ragoonan, along with Martin’s brother Anton “Rags” Ragoonan, Francis “Dave” Ragoo and a few other friends, collaborated to produce “D’ Untouchables Mas Band”.  D’ Untouchables grew rapidly and became one of Miami’s most popular mas bands.

In 1996 Joan and Martin re-christened the band D’ First Dimension and a true legend was born.  D’ First Dimension rapidly became known for the beauty and craftsmanship of their costumes.  Every costume was fitted individually to the masquerader – no more were bulk costumes being created.

Their name was synonymous with perfection.  Masqueraders lined up for the costumes and the judges enthusiastically bestowed awards on this deserving band.  The band became such an integral part of Miami Carnival that even fifteen years later, carnivalists talk about the glory of D’ First Dimension. Joan stayed with Miami Carnival, working side by side with Selman Lewis and the other Board Members to create the Carnival that we have become familiar with over the years.

In 2009, when Miami Carnival joined forces with the Broward Carnival to forge the unity of One Carnival, Joan was one of the four representatives of Miami Carnival chosen to represent the Board in this new venture.

Over the years she held Executive positions with the new Joint Carnival, and was elected Chairman of the Board in 2013, a position she holds today.

Now married to fellow Lucian Phil Justin, Joan Hinkson long ago broke through that famous glass ceiling, with accomplishments that make her fellow Caribbeans and all women proud.

Miami Broward Carnival will be held on Sunday, October 8, 2017.