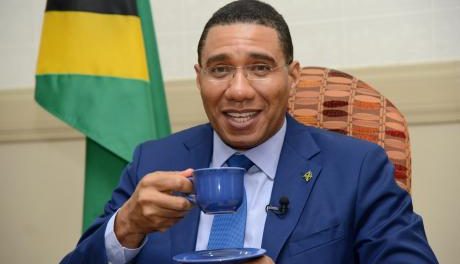 Jamaican voters returned 48-year-old Prime Minister Andrew Holness to power in a landslide to oversee the nation’s recovery from its worst-ever economic crisis.

With 98.9% of ballot boxes counted, Holness’s Jamaican Labour Party was ahead in 49 of the 63 parliamentary constituencies, compared to 14 seats for the opposition People’s National Party led by former Finance Minister Peter Phillips.

Holness told supporters that Phillips had called to congratulate him on his victory.

Jamaica has undergone one of the most dramatic turnarounds in emerging markets in recent years, slashing government debt, opening the doors to Chinese investment and getting unemployment down to record levels. Holness has pledged to get the island of nearly 3 million people back on track from the devastation caused by the pandemic, which left its tourist resorts empty for months on end.

Speaking alongside Holness, Finance Minister Nigel Clarke said that the country is going through “the greatest crisis that Jamaica has faced”. Gross domestic product will plunge 7% to 10% this year, according to the central bank, which would be the biggest drop since at least 1980.

But voters on the island of nearly 3 million people didn’t blame Holness for the crash, and his forceful response to the pandemic as well as his backing for large public works projects bolstered his popularity.

Holness has vowed to make the central bank independent and keep tight curbs on spending during his second four-year term.

Voters were required to wear masks, and had their temperatures checked and hands sanitized before being allowed into voting stations. Those isolated due to Covid-19 were allowed to vote in the final hour before polls shut.

Jamaica’s stock market is down 36% in dollar terms so far in 2020, the worst performer among more than 90 primary indices tracked by Bloomberg. Over the preceding decade it provided the best returns on the planet.