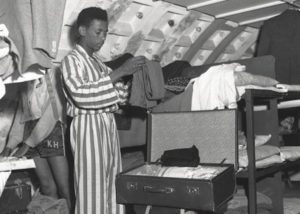 PICTURED: A Windrush settler prepares for bed at the Clapham South Deep Shelter after his journey to London

HIGH COMMISSIONERS from the Caribbean are calling on the government to be more compassionate to UK residents from the Windrush generation who have been deemed “illegal immigrants” despite having lived and worked in the UK for decades.

Twelve Caribbean high commissioners have joined together to express their concerns over the treatment of members of the Windrush generation who are now embroiled in immigration issues due to a lack of up-to-date documentation that proves their right to remain.

Kevin Isaac, high commissioner for St Kitts and Nevis to the UK, told Channel 4 news: “In a sense it is a fight for survival because we have people who are losing access to their bank accounts, to their pension, healthcare. And so it is definitely a fight for survival.”

According to the Caribbean high commissioners, up to 50,000 members of the Windrush generation may be without the necessary documentation to prove their right to work and live in the UK.

Seth George Ramocan, high commissioner for Jamaica to the UK, told the programme: “These individuals, having been here from childhood, had no sense in their minds that they’re not British and that is really the tragedy of it. And so I think with a compassionate approach to it, we’ll understand their circumstances and I think that’s really what is needed.”

Lord Ouseley, former chairman of the commission for racial equality, said he doesn’t think a lot of people are sufficiently aware of the devastating impact this issue is having on people who came here “quite legally” as British subjects.

A petition, which is independent of the action taken by the twelve Caribbean high commissioners to the UK, has been set up calling on the government to grant an immigration amnesty to those who arrived in Britain as minors between 1948 and 1971.

The petition has so far been supported by more than 50,000 signatories. If 100,000 people sign the petition, the Petitions Committee will consider it for debate in Parliament.