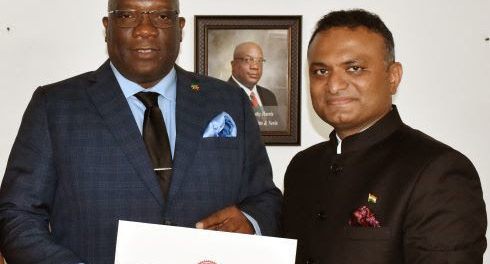 BASSETERRE, St. Kitts, June 10, 2020 (Press Unit in the Office of the Prime Minister) – The Republic of India has become the latest country to extend congratulations to Dr. the Honourable Timothy Harris, Prime Minister of St. Kitts and Nevis, and his Team Unity coalition on the massive victory in the recent general elections.

Dr. K.J. Srinivasa said such outstanding election result indicates the faith and confidence the electorate in the country has placed in the Team Unity coalition and its policies to advance its people into a modern nation.

The High Commissioner noted that it is his hope that Team Unity’s “second innings at the helm of affairs in St. Kitts and Nevis will result in further enhancement of our friendly bilateral relations.”

“On this occasion, I wish to reiterate my commitment to working closely with your Government to further strengthen and expand our bilateral cooperation in various fields, including renewable energy, pharmaceuticals, information technology, agriculture/agro-processing, training and capacity building,” Dr. Srinivasa added.

India’s High Commissioner used the opportunity to remind that his country looks forward to a proposal from St. Kitts and Nevis for the utilization of the US$1 million grant announced in September, 2019 – during the First India-CARICOM Summit in New York – which could be utilized for upgrading the health infrastructure and procuring of ventilators, medicines and other essential items to fight COVID-19 and other diseases.

“The Government of India also wishes to reiterate its commitment to combat COVID-19 across the world, and as part of its endeavour, we are in the process of dispatching medicines worth US$100,000 for use in St. Kitts and Nevis public hospitals,” High Commissioner Dr. K.J. Srinivasa said.