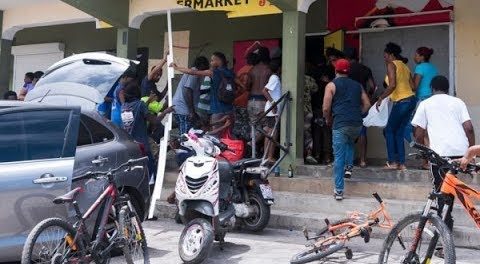 With no help from Indian govt, neighbouring St Kitts pools in R32.93 lakh to rescue Indians at Irma-ravaged St Maarten

Hurricane Irma has ravaged the Caribbean island of St Maarten

A classic tale of brotherhood seems to be brewing in the Caribbean islands, ravaged by Hurricane Irma, with the Indian community from St Kitts reaching out to help the 1,500-odd Indians, stranded on the island of St Maarten. The Indian community of St Kitts and the Indian Merchants Association (IMA) has managed to pool in $50,000 (R31.93 lakh approx) to pay a vessel to rescue the stranded Indians from St Maarten today.

Sunil Gehani, president of the IMA, and Seema Shahani, a resident of St Kitts, who had previously written a letter to External Affairs Minister Sushma Swaraj requesting urgent aid for the islanders, are helming the rescue efforts. mid-day had earlier reported how the Indian embassy in Venezuela had refused to offer assistance to evacuate the residents.

Rescue work begins
The vessel will make its first journey to St Maarten on Monday and will bring home 150 Indians to St Kitts, where people are opening up their homes for them. Each journey will cost R15.91 lakh approx.

“Planes [excluding military ones] cannot land or take off at St Maarten because there are no cell towers or radars operational right now,” said Gehani. “We spoke to the Dutch military, and they said that they were conducting a survey to gauge the safety of the waters around the St Maarten harbour. They will create a coast guard strip at the harbor after the survey is completed, and the first round of evacuating 150 Indians will the begin,” he added.

No help from India
According to Gehani, 300 Indians will be rescued in the next 48 hours. “We have made a list, which has 300 names on it so far, with preference being given to children and the elderly. Each person will be allowed two bags. No pets will be allowed aboard the vessel,” he said. Gehani also said that St Kitts’ Minister for Foreign Affairs Mark Brantley had written saying that he was going to welcome the distressed people. V Mahalingam, the high commissioner of India to Guyana, is also assisting the stranded in every way possible. “This should be the responsibility of the Indian government,” Gehani said. “Ideally, the Indian government should have evacuated them before the hurricane hit.”

According to reports, the island of St Maarten is currently undergoing heavy looting and robbery, and is in the midst of anarchy.
“St Maarten is on the brink of a civil war,” said Shahani, who has family in the ravaged island. “Both my parents, my brother, his wife and their two kids, as well as another four people, who are my family friends, will be boarding the vessel.”