St.Kitts’ Debra P. Laville-Wilson recently graduated  from South Dakota State University  with a Doctorate of Philosophy in Rural Sociology with concentrations in Deviant Behavior and Social Organization in May 2017.   The dissertation is entitled “The Transformation Of An Agro-Economic System To A Tourism-Economic System: Perceived Impacts Of Sustainable Tourism Development”.

Dr. Wilson’s story is one that can be seen as an inspirational journey which saw her rising from the ghetto streets of McKnight on St.Kitts to receiving a Doctoral degree from a US University.

Debra was  born and raised in the McKnight Community, more specifically in Irish Town where she was the eldest of three children.  She was raised in a single-parent household, by her mother Lenore Laville.

Wilson  graduated from the Basseterre Senior High and attended the St. Kitts and Nevis Technical College where she pursued  Secretarial Studies track.  Upon graduation from the Technical College, she  worked in a number of areas of the civil service including the post office and the electoral office. 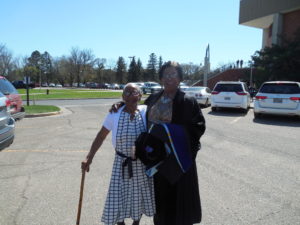 Laville migrated to the US where she gained her first academic achievement when she received her  General Education Diploma (G.E.D) in 1984.  Her GED success inspired her to  apply  to a four year university and was accepted in the City University of New York (CUNY) where she earned a Bachelor’s of Science Degree in Criminal Justice with minors in Sociology and Dispute Resolution and  Mediation in 1994 from John Jay College of Criminal Justice.

Upon moving to Virginia in 1996 she applied to and was accepted at Old Dominion University where she earned a Master’s Degree in Applied Sociology with concentrations in Criminal Justice and Women Studies in the year 2000.  After having taught at the college level for almost 10 years Dr. Laville-Wilson  was accepted at South Dakota State University in 2009 to pursue a terminal degree in Rural Sociology.

Now equipped with a Doctoral degree it is her goal and   to establish a school where students can earn their G.E.D and take the Standard Aptitude Test (SAT) to attend the college of their choice.   With this dream, she will be afforded the opportunity to assist youths who are high school drop-outs to pick up where they left off and continue on a positive path toward becoming successful people in their communities.

Dr. Laville-Wilson extended heartfelt gratitude to a number the citizens of St.Kitts-Nevis the land of her birth and where her foundation was set.

“ I will like to extend a heartfelt thank you to the citizens of St. Kitts and Nevis who assisted me in this venture.  To the Fitzroy Bryant College students and professors, to the Charlestown High School students and teachers, employees at the Voter’s Registrar office, employees from the department of tourism, and most importantly, those citizens in St. Kitts and Nevis who took the time to complete the survey leading to the completion of this degree.  In addition, I will like to thank those of you who contributed in other ways to this project. I appreciate each and everyone’s input,” said Dr. Laville-Wilson

“This degree is dedicated to the sugar workers of St. Kitts and the cotton pickers of Nevis,” she concluded.