Basseterre, St. Kitts, March 08, 2017 (SKNIS): The government’s commitment to uplift and empower women in St. Kitts and Nevis was highlighted on Wednesday (March 08) during this week’s edition of the “Working for You” radio and television programme.

The live broadcast focused on women’s empowerment, given that the date is being celebrated around the world as International Women’s Day. Minister of State with responsibility for Gender Affairs, Honourable Wendy Phipps, and Director (Ag.) in the Department of Gender Affairs, Celia Christopher, appeared on the programme. 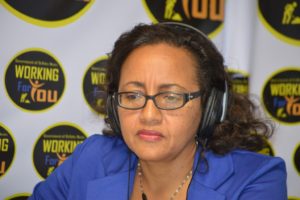 Minister Phipps highlighted a number of moves that were taken by the government since it assumed power in 2015, as achievements in female empowerment that she was particularly proud of. These included the appointment of women to the post of permanent secretary in various ministries including Foreign Affairs, and Public Infrastructure.

“In terms of the Parliament, the recent appointment of a deputy speaker and also a senator in the person of Akilah Byron Nisbett, that is also worthy of note,” Minister Phipps said, noting that it ensured the deputy speaker post left vacant from 2010 to 2015 by the previous administration was filled. Honourable Michael Perkins preceded Senator Byron as deputy speaker in 2015 but he was elected to the speaker’s post in June 2016.

However, Minister Phipps added that there were trends set by the previous administration, which were being sustained such as the appointment of Dr. Hazel Laws as the Chief Medical Officer, a post that was once held by Dr. Thelma Phillip Browne. Dr. Browne currently serves as the St. Kitts and Nevis Ambassador to the United States, following in the footsteps of Jacinth Henry-Martin, who served from 2011 to 2015.

“We are developing a positive track record in terms of the recognition and appointment of women to key positions,” Minister Phipps said, whose own appointment as a senator in the federal parliament in 2015 can be classified as such. “… We are doing it in a manner that demonstrates merit, acumen, potential and also the achievement and qualification to be so named.”

International Women’s Day was first observed by the United Nations on March 08, 1975 and became an annual, global observance. The theme for the 2017 commemoration is “Women in the Changing World of Work: Planet 50:50 by 2030.