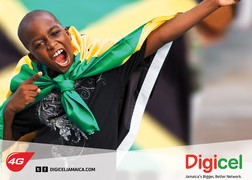 Basseterre, St. Kitts – Wednesday 21st July 2021. The world’s fastest man and eight-time Olympic gold medalist Usain Bolt is giving his verdict on the “stars of tomorrow” in run up to the Tokyo games and sports fans might be in for a surprise.

In a cute viral video to celebrate the start of the 2020 games, Usain teamed up with Caribbean sports broadcaster SportsMax to cast a critical eye over the talent-packed field in the first-ever National Baby Trials. And fresh from his own recent dose of baby fever with the arrival of his twins bringing his brood to three and giving him the inside track on all things baby-related , Usain was only too happy to talk toddler track triumphs and tantrums.

“A golden performance” and “you’ve just seen the gold medalists of tomorrow” were just some of the stand out comments with the Digicel Chief Speed Officer full of glowing feedback on the toddler athletes competing for glory.

Jaw dropping athletic action, nail biting knife edge finishes, the frustration of failure, emotional meltdowns and unadulterated joy coupled with a healthy helping of showboating – the baby contenders brought it all when they touched the track. Watch here to see Usain’s take on the National Baby Trials with SportsMax https://www.youtube.com/watch?v=quRTmMLQVBc

SportsMax will be bringing all of the action from Tokyo to sports fans across the Caribbean region via its mobile app.

As a Digital Operator, Digicel is in the business of delivering powerful digital experiences 1440 minutes of each day to customers – that’s every minute, all day, every day.

Through its world-class LTE and fibre networks, together with its suite of 8 apps spanning sports (SportsMax), music (D’Music), news (Loop), local radio and podcasts (GoLoud), TV streaming (PlayGo), enhanced messaging and marketplaces (BiP), cloud storage (Billo) and self-care (MyDigicel app), Digicel is the only operator in its markets that can deliver that.

Serving consumer and business customers in 32 markets in the Caribbean, Central America and Pacific, its investments of over US$7 billion and a commitment to its communities through its Digicel Foundations in Haiti, Jamaica, Papua New Guinea and Trinidad & Tobago have contributed to positive outcomes for over 3 million people to date.

With its Better Together brand, Digicel is making a promise of simply more to customers and communities and its 7,000 employees worldwide work together to make that a powerful reality day in, day out.