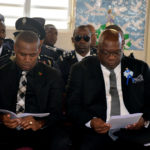 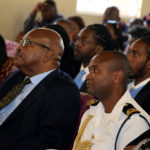 BASSETERRE, St. Kitts, March 28, 2018 (Press Unit in the Office of the Prime Minister) – Members of the Team Unity Cabinet of St. Kitts and Nevis joined hundreds at the Olivet Gospel Hall on Malone Avenue, Basseterre, to pay their final respects to a distinguished son of the soil and dedicated civil servant, the late Dr. Joseph Jacob Halliday OBE, who was laid to rest earlier today, March 28.

In his tribute to the late Dr. Halliday, Prime Minister Harris again extended heartfelt condolences to his family, his friends and colleagues.

Dr. Harris said, “Dr. Joseph Halliday was one of our great citizens who accepted the call to put country above self, and he will forever be admired for his loyal stewardship and service to the Federation of St. Kitts and Nevis. His was an expansive contribution to our country in the fields of education, training, social capital formation, in security, public service and service to humanity which for him was about service to God.”

Other tributes were delivered by Permanent Secretary in the Ministry of Education, Mr. Vincent Hodge and Commissioner of Police, Mr. Ian Queeley.

Dr. Halliday, who was born in Fig Tree, Sandy Point, served as Chief Education Officer and Headmaster at the Sandy Point High School (now the Charles E. Mills Secondary School). He was also the first Force Personnel Officer of the Royal St. Christopher and Nevis Police Force and the Fire and Rescue Services and he chaired the Clarence Fitzroy Bryant College (CFBC) Transition Management Team as well as the Public Service Commission.

An alumnus of the University of London and the University of the West Indies, Dr. Joseph Halliday received the SPBS Distinguished Community Service Award in September 2012 at the Sandy Point Benevolent Society’s (SPBS) second annual awards banquet. He was awarded the prestigious Order of the British Empire (OBE) for his services to education.