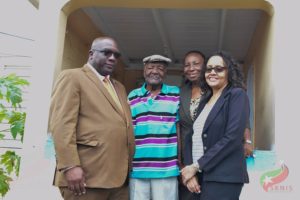 Prime Minister Harris wished Brother Bailey a happy birthday and noted that the centenarian was a long standing worker at the sugar factory with his father.. Dr. Harris said that he also recalled his days visiting Mr. Bailey at his grocery store in Saddlers Village.

“It is good to come back on his own sacred ground to wish him happy birthday and to see that he is doing very well and to give God thanks. Brother Bailey is among that very small but increasing number of centenarians in St. Kitts and Nevis of which there are fewer than 20,” he said.

Brother Bailey thanked the delegation for its visit and for the token of appreciation that he was given, while wishing the delegation God’s blessings.

Minister Phipps also added her birthday wishes to Brother Bailey and mentioned that the ministry held a very important meeting with the World Health Organization (WHO) where the topic was broached of having older persons retire gracefully in the homes instead of in senior homes.

“I wish you all the very best and I hope that I can live to be even half of your age,” she said.

Mrs. Wigley also added that the department will be recognizing older persons throughout the Federation for Centenarians Day, which is celebrated on May 31.

“Brother Bailey is the oldest male in our Federation and he is really doing well. The Ministry of Social Services, Community Development and Gender Affairs wishes him all the best,” she said.