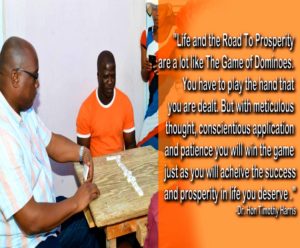 “I want to thank all those who have provided leadership over the years to this league at the high level of commitment we have witnessed,” said Dr Harris, who is also the Prime Minister of the Federation of St. Kitts and Nevis. “It is the longest surviving domino league in the country and perhaps in the Caribbean, and for that I want to not only thank the founders because it meant they were unto something good when they asked me to become involved with this league.”

Dr Harris, the Political Leader of the Peoples Labour Party (PLP) one of the three parties in the ruling Team Unity Administration, made the remarks on Thursday evening October 5 after watching two of the games in the on-going league. He first visited the Edgar Gilbert Sporting Complex pavilion where Molineux was facing Small Corner Bar. 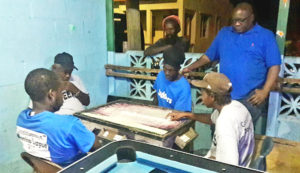 Interestingly Small Corner who have been using the Edgar Gilbert Sporting Complex pavilion in Molineux as their temporary home following the destruction by Hurricane Irma of the shed they were using on Lemon Hill as their home base, also beat Molineux 13-8. Both teams are from Constituency Number Seven.

“Basically tonight we observed two very interesting games at Molineux and at Saddlers,” said Dr Harris. “Saddlers had the home advantage and they did very well, although there was excellent playing from both sides. For me it was a pleasure being here to observe the games, to see the sense of camaraderie that has developed over the years.”

The Prime Minister added: “Clearly you can see that across even the political boundaries and across the different villages, a high level of togetherness, a high level of respect among players has been cultivated over the last 22 years. We wanted to seize some of those things when we started the league.”

According to Dr Harris, the aim of starting the league was to get rid of some of the divisions where persons from one community would not go to another community because of infighting. The organisers of the domino league hoped that those things would basically disappear in time.

“Today we have witnessed, and we have seen a great synergy and a greater togetherness across the various communities in this league and for that again I am pleased,” concluded Dr Harris. “I think it has been a worthwhile effort and I am looking forward to the 25th anniversary of this league.”