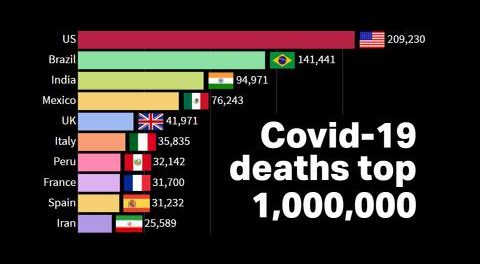 Frontline healthcare workers around the world recount stories of battling Covid-19: ‘I never felt like a hero’

The Covid-19 pandemic that swept rapidly around the world over the last nine months didn’t hit all countries or health systems equally.

Medical workers — some laboring in challenging conditions and without enough personal protective equipment  — said they’ve done their best to save as many patients as possible. Still, the death toll continues to rise.

More than 1 million people — likely many more, given inadequate reporting in some regions — have now died from Covid-19. The virus, which first appeared in Wuhan, China, has spread to most countries around the world. Some of the worst outbreaks materialized in both hemispheres, as far afield as Brazil, the U.S., and Italy.

Even in wealthier countries with advanced health systems, such as the United Kingdom and the United States, health-care workers are nearly 12 times more likely to test positive for the virus than the general population, studies have shown.

Those without adequate access to PPE have the highest risk. CNBC interviewed doctors, nurses and other front-line workers across the world to see how their countries and health systems are grappling with the pandemic. Here are some of their stories.

When Dr. Sriram Sunil arrives at work at a public hospital in Bangalore, India, the young doctor checks which of his patients made it through the night.

There were typically more than 500 Covid-19 patients admitted to his hospital at any one time, with at least 50 of them in intensive care, he said in mid-September. Many of the patients were from the poorer neighborhoods and required oxygen by the time they arrived. As an intern medic, meaning he’s in his first year, the bulk of the workload has fallen on him and his colleagues, as the more senior staff are concerned about contracting the virus.

A doctor treating patients with symptoms related to coronavirus takes a break at a health clinic on April 3, 2020 in Guayaquil, Ecuador.Francisco Macias | Getty Images

Sunil said he is continuing to show up to work for shifts of six hours each with breaks in between. The following week, he quarantines.

In India, where more than 93,000 people have died so far, health-care workers have complained that they are ill-equipped to respond to the pandemic, and some have even gone on strike. The country ranks among nations with the highest rates of health-care worker fatalities from the virus, alongside the United States, Brazil, South Africa and Mexico, according to Amnesty International.

Sunil’s hospital has access to some personal protective equipment, such as gowns, but it’s not necessarily the right kind. So, often, he ends up layering scrubs on top of scrubs in an attempt to avoid exposure as best as he can.

Once, it got so hot under his layers of gowns that he felt like he was going to faint while doing chest compressions on a dying patient, he said.

Sunil is among an army of front-line health-care workers around the globe who have been showing up at hospitals and clinics to battle a disease they’ve never encountered before. Without proven treatments or a vaccine, they’ve often felt like they were flying blind, particularly in the early months and even into the fall, they said. CNBC interviewed a dozen doctors, nurses and physician assistants, who recounted their stories from the pandemic, both during the surges and in the periods of relative quiet.

In late May, Dr. Salim Saiyed was part of a contingent of doctors from the Islamic Medical Association of North America asked to fly to the U.S. Virgin Islands to help prepare protocols and treat patients. It was a risk, given that it took several long layovers to get there. But Saiyed took his chances.

Saiyed, a hospitalist, or someone who specializes in caring for hospitalized patients, is based in Pennsylvania. He currently works as the chief medical information officer at UPMC Pinnacle, a large hospital system. Throughout his career, he has practiced medicine in a variety of under-resourced settings, including refugee camps. But nothing could have prepared him for Covid-19. “I’ve seen death and I’ve seen severe illness, but I’ve never dealt with a virus where loved ones couldn’t even see the dying family member,” he said, referring to strict quarantines implemented to stop the virus’ spread.

The islands, which typically receive a steady stream of honeymooners, were relatively deserted when he arrived because of travel restrictions and a steep drop in tourism. Anticipating a surge among locals, particularly once travel picked back up, Saiyed recalled, several hospitals were fighting for supplies from the mainland. “I was working at a hospital that was recovering from a hurricane, so part of it was still under renovation,” Saiyed said. “I feared they would be rapidly overwhelmed.”

Moreover, there were only limited flights to Florida for the sickest patientsand an undersupply of providers to treat them. Saiyed’s fears were confirmed when the U.S. Virgin Islands had to ban tourism for a month in August, its massive economic driver, after reporting more than 1,000 cases.

“It really drove home for me that so many people, especially our most vulnerable, had few options to protect themselves or to get the care they need,” said Saiyed.

Other countries had plenty of resources, but providers still felt moments of helplessness.

As the patients streamed in during the spring, she set up iPads so they could talk to their loved ones, because in-person visits were canceled. But at times, it was hard for them to breathe and get words out. She said she’ll never forget one elderly patient who lived with several family members who tested positive. Taylor was the one who had to tell the woman that her husband didn’t make it.

“Sometimes all you can do is sit there with the patient, let them cry, and talk about it,” she said. Taylor doesn’t typically share her own personal experiences with patients, she said, but at that moment she opened up about losing her own husband. Still, she knew it was hard on her patient to have been denied the opportunity to say goodbye.

Taylor said the woman was too sick to attend the small funeral gathering, so the hospital streamed it on an iPad a few days later.

In the United Kingdom, biotech executive Dr. Ross Breckenridge didn’t feel right being at home while a pandemic raged. He first received an email from the General Medical Council in February to see if he’d be willing to come back into medicine. By the spring, he was on site working at a top London hospital helping treat Covid-19 patients.

He was immediately struck by the severity of the symptoms, particularly after spending his Monday evenings tuning into Zoom autopsies.

“To see the pathology up close was shocking,” Breckenridge said. “The scary thing about this is dealing with a virus you know so little about. It’s probably like being a medieval doctor where you try to treat as best you can.”

Breckenridge felt that part of his contribution could be to help the more junior doctors on the ward to not panic. But there were moments of levity, too. Some of the patients told him they felt bored once they started to recover, because visitors were not allowed. So the staff arranged to hand out iPads and play pub trivia as a way to pass the time.

The U.K. has reported more than 42,000 deaths from Covid-19, with more than 430,000 cases. That makes it the site of one of the worst outbreaks in Europe, with a surge that lasted longer and spread to more parts of the country than other hard-hit nations, including Italy and Spain.

California internist Dr. Lucy Kalanithi has is seeing a lot of patients that have to quarantine in multi-generational households in the U.S., which is grappling with the worst outbreak in the world with more than 7 million coronavirus cases and over 204,000 deaths.

Even a mild case can send patients into a panic, fearing the worst.

“I’ve been hearing from patients how totally terrifying it is to have this diagnosis,” she said. “It can be traumatic even for those who do fine.”

Since the pandemic, Kalanithi’s practice has shifted. Previously, she mostly saw Stanford patients and their families with insurance. Now, she’s seeing a broader demographic of people who live in the area, many of whom are lower-income and lack coverage.

“We are answering totally different questions,” Kalanithi said. “Not only about Covid-19, but how to quarantine family members in a home with just a few rooms.”

“It’s added layers of suffering for people who are suffering already,” she said.

Once the crisis has passed, she said, she hopes that the United States will take a good, hard look at a system that exposed its most vulnerable and left many with hefty bills.

“The world has changed overnight, and it shows that the health-care system as is can change and adapt in the way we do things,” she said.

In Brazil, a country that mirrors the U.S. with an uncoordinated national response, the poor are also suffering disproportionately.

Dr. Guilherme Amaro, an intensive care physician in Sao Paulo, a city that was hit particularly hard by the pandemic, has worked with coronavirus patients since April. It’s been exhausting, and there are days when he works for 48 hours straight without going home, he said.

But he’s grateful that he hasn’t gotten sick yet, after watching some of his friends contract the virus, he said. Many doctors and nurses have been doing their best to help patients in the lowest-resourced neighborhoods, including in the favelas, despite a lack of personal protective equipment.

Amaro said he believes that there’s been a failure of leadership in his country, which is prompting many people to not wear masks or socially distance. The U.S. has also seen its share of citizens refusing to take those precautions.

“The president tried to convince the population that nothing much was happening, to keep the economy working,” he said of Brazilian President Jair Bolsonaro. “He didn’t wear masks much in public and got sick himself.”

Brazil has now reported roughly 4.7 million coronavirus cases and more than 140,000 deaths, meaning it has had one of the worst outbreaks in the world.

In Milan, Italy, one of the first countries to struggle with a surge in cases, Dr. Giovanni Landoni recalls working 15-hour shifts as the crisis there peaked in the spring.

Landoni, an intensive care doctor, said many of his more junior colleagues suffered from anxiety watching so many of their patients die. After many years in medicine, it’s something he’s become more familiar with, but it was still a “hard and stressful” experience, he said. And he needed time to recover once the worst was over.

Hard decisions were made, he said, but Landoni felt that his hospital did the best it could. In eight days, Vita-Salute San Raffaele University built new beds for patients and modified its therapeutic approach in accordance with the latest guidelines. He remains proud of that.

These days, Italy has largely avoided a second surge and has returned to a relative normalcy as restaurants and shops have started to open up.

For that, Landoni credits the success of public health measures and the willingness of the public to do their part. And not just the medical workers on the front lines.

“We are aware that the lockdown led to a reduction in the number of patients, and that was the most important thing in the management of the disease,” he said.