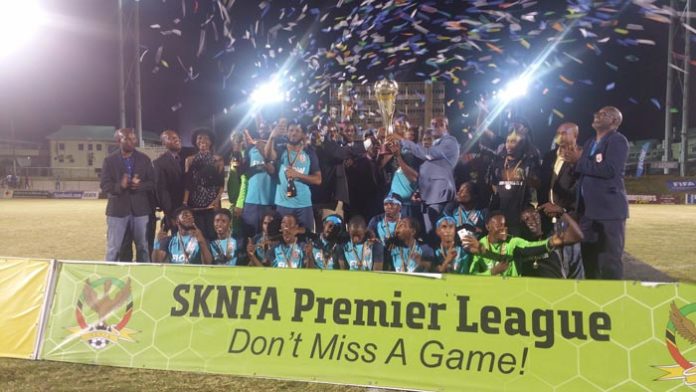 Basseterre, St. Kitts – The Flow 4G Cayon Rockets proved its 2016 triumph as no fluke, needing only two games in a best of three versus the Hobson Enterprises Garden Hotspurs to repeat as the SKNFA Premier League champions.

In the first game, the defending champions took off immediately when Javeim Blanchette opened the scoring with just nine minutes on the clock. He was influential in the second recorded goal midway through the first half.

However, the Spurs team had a better showing in the second half, except for goalkeeper Adolphus Jones, who was in top form in denying the Spurs attackers.

Heading into game two on Wednesday evening, the Spurs team was looking to force a third game, while the Cayon team wanted to ensure they sealed the title before that happened.

However , the Spurs team flew out the gate in the opening minutes of the game by keeping the Cayon defenders on the back foot, with a lot of attacking pressure as they got eight corner kicks in the opening 22 minutes.

The Cayon defence, though, stood firm thanks to some big saves for goalkeeper Jones.

The game turned when a clearance from the Cayon defence found its way to Carlos Bertie, who then found Kevin Benjamin on the lefthad side with acres of space open to him. Benjamin then found Bertie again, finding a pocket of space open in the heart of the Spurs defence and giving his team a 1-nil lead with a clinical finish.

Though the Spurs team kept up its attacking dominance, it was unable to find the finishing touch to bring the game level. With time running out and the Spurs’ title hopes fading, the team forced a number of saves from Jones, but were left frustrated.

The final whistle caused the entire Cayon bench to explode with celebration and the team did a lap of honour for the Cayon fans who supported the team for the entire season.

“Nothing was different,” he said. “We just had to stay with our plan, stay focused and confident [to] make sure we came out victorious [to] repeat the championship.”

He added that he knew whatever momentum the Spurs finished with in the first game would be transferred in to the second game. “I just told them to stay focused and soak up whatever pressure [they felt] and make sure they score more goals,” he said.

Cayon midfielder Javeim Blanchette told the press it was a team effort for its triumph, following some inconsistencies heading into the final four.

“We were a bit rocky coming into the final and many of the teams had us underneath them, but we came together,” he said. “We did not lose any games because the team bonded and we started to play some really good football.”

Blanchette further commented on his team’s performance throughout the entire season.

“I would say we were one of the consistent teams throughout the season,” he said. “Every cup we participated in, every round we were leading, from the first game to the last game, we worked. A lot of it is not seen, but personally I think we are one of the hardest-working team in the league and it shows.”

He was asked to rate between this season’s and last season’s triumphs as to which was more challenging.

“I would say the first one, because we were underdogs and everybody counted us out and that way we were able to sneak in,” he said. “But [in]  this one, we were the target, but it is kind of tight.”

Al Richards, head coach of the Garden Hotspurs team, said that though he thought his team had the better of the game, goals are what mattered and it failed to score.

“The guys worked hard,” he said. “We had good playoffs, but we dropped short in scoring goals. It was a long season; we started well, we played in four finals, we won the Presidents Cup, but still, it was a good season.” He added that he was disappointed to be in four finals and only win one, but was confident heading into next season.

Players from Cayon also won multiple awards, with Blanchette for the second time in two years winning the Player of the Season Award, Isaac repeating as Coach of the Year, and Jones winning Best Goalkeeper of the finals, Fair Play Award and Player of the Finals.