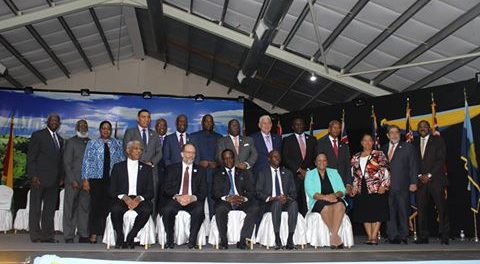 CARICOM Heads of Government in a family photo following the Opening Ceremony for their Thirty-eighth Regular Meeting in Grenada, Tuesday. The Heads move into their business sessions on Wednesday and Thursday at the Radisson Beach Resort.
Tweet
by Barbados Today on July 4, 2017. ST. GEORGE’S, Grenada, CMC – Caribbean Community (CARICOM) leaders began their 38th annual summit here on Tuesday night underscoring the importance of closer collaboration in a changing global environment and also emphasising the need for a unified position on the political situation in Venezuela.

Host Prime Minister Dr Keith Mitchell, who will chair the three-day summit, told the opening ceremony that the 15-member regional grouping needed to find the resolve to commit to a unified position on the current political challenge in neighbouring Venezuela, where opposition forces are seeking to remove the government of President Nicolas Maduro by staging daily street demonstrations that have so far resulted in the death of more than 50 people.

“We cannot ignore what is going on in a country with which all of our member states have had strong historic ties; and one with which countries such as Grenada and Trinidad and Tobago share maritime borders,” Mitchell told the ceremony, adding “these realities, combined with our international record of standing up for political order, democracy and respect for human rights, ought to inspire us to arrive at a clear stance on this current crisis in Venezuela.

“Of course, in doing so, we must be cognizant of the broad principles of non-interference, the support for the rule of law and order, constitutionality, and the respect for human rights,” he said, noting “we appreciate that there is a duly elected government in place in Venezuela, and that many of the internal struggles are manifestations of a struggle for political power.

“As proud, independent nations, with a shared history of anti-colonial struggle, we approach these issues, rightfully so, with a particular mindset. Indeed, when certain international advocates whisper aloud about unconstitutional regime change, we must give pause; but pause must not result in paralysis. Our inaction must not be the consequence of our suspicion.”

Mitchell said that as a region and as neighbour, CARICOM needs to be concerned about anomalies and excesses; and about extremism from all sides.

“We must stand united to condemn violence – from whichever quarter it comes. We must, therefore, not retreat from using our close ties to nudge all parties to a position of “dialogue” that will be in the best interest of the people of the Bolivarian Republic of Venezuela.”

The Venezuela issue, according to the CARICOM Secretary General Irwin LaRocque is not an agenda item for the summit, but he acknowledged that it was possible that the leaders would be issuing some form of statement on the situation at the end of their deliberations.

In his address, Mitchell joined his colleague heads of governments from Guyana, The Bahamas and Haiti in underscoring the importance of the regional bloc to the socio-economic development of the Caribbean.

But he said that while the grouping has had much to cheer about in the past “we ourselves, do a lot to undermine the very construct of CARICOM and regional integration when we yield to the urge to go off on solo excursions, even after we reach common positions.

“Every instance of this deepens the cynicism about our ability as CARICOM heads to remain consistent; to stand in solidarity on issues; and to follow through on consensus decisions,” he said, noting that “we must be acutely aware that our constituents around the region, especially our youth, [and] pay close attention to our collective conduct on issues that matter a great deal to them.

Mitchell said during his chairmanship over the next six months, he intends to pursue several key achievements, including a comprehensive quantitative assessment of trade performance under the CARICOM Single Market and Economy (CSME) that allows for the free movement of goods, services, labour and skills across the region and the strengthening of the “Statistics Division” of the CARICOM Secretariat, to better equip it to carry out the heavy lifting required in respect of evolving demands.

Outgoing CARICOM chairman and Guyana’s President David Granger said the CSME remains as relevant today as it had been when it was first conceived in the 1989 Grand Anse Declaration to help the region counter the changes in the global environment.

He stressed that while the initiative remains a most ambitious one “it must not become not become our most ambiguous” while urging his regional colleagues to ensure that all the necessary mechanisms were put in place to ensure that the CSME was accelerated into becoming the single space as envisioned by the early regional leaders.

Granger said CARICOM must guard against becoming an “obsolete model”, suggesting that it should not be seen as a marriage of 15 airlines, 15 cricket teams and 15 embassies, which might mesmerise some people “but could deplete the treasuries of our states”.

The newly elected Prime Minister of the Bahamas, Dr Hubert Minnis also warned that CARICOM  must not be viewed as a  “club of officials and politicians” instead of a community of the people.

He urged closer collaborations on policies that would advance the regional integration movement so that the region could “speak to the world as one voice”.

He said economic development for the region could be secured “when we become collectively more successful” adding “our people must know CARICOM is working for them when they can feel, taste and feel CARICOM”.

In his address, Haiti’s  President, who is attending his first summit since being sworn into office in February, said that Port au Prince would seek to strengthen existing relations with the grouping, adding “we affirm our support in the field of regional security”.

One of the highlights of the opening ceremony was the presentation of the 12th CARICOM Triennial Award for Women to Jamaican Shirley Pryce, the founder and president of the Jamaica Household Workers Union (JHWU) , who used the occasion to call on regional governments to ratify the necessary international conventions in support of the work of domestic workers in the Caribbean.