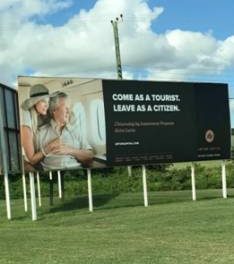 CASTRIES St Lucia — Caveat emptor, or buyer beware, is the message from industry experts in relation to Saint Lucia’s newly redesigned citizenship-by-investment program (CIP), which has come in for renewed criticism for its non-transferability from generation to generation, but also that growing opposition within the country makes it unattractive for investors.

Last week the opposition St Lucia Labour Party (SLP) pledged to review every citizenship granted by the current government under the CIP. According to the SLP, the actions of the United Workers Party (UWP) administration weaken the reputation of the CIP.

“If the SLP regains power, they have pledged to make every investor pay an additional US$200,000,” said a leading CBI lawyer. “It is getting to the point that if you were serious about buying a second citizenship in the Caribbean, Saint Lucia would be the last place you would look.”

When launched on January 1, 2016, by the SLP government, Saint Lucia’s program contained some unique features, including an annual cap of 500 applicants and the requirement to show proof of minimum $3 million net worth, which have now been removed by the current UWP administration of Prime Minister Allen Chastanet.

The SLP said it believes that these changes, along with the cheapening of the level of donation as a qualifying investment and the guarantee of processing all Desert Star Holdings project applicants within 35 days, should all be reconsidered for the sake of the reputation of Saint Lucia.

“Another thing to consider is that Saint Lucia pays its agents generous commissions,” the lawyer said. “Most other countries don’t do this. The question anybody should ask themselves is why is Saint Lucia paying such lavish commissions? It is clear to me that it’s because they have to. They problem is the buyer will pay for it in the end.”

In what has been described as a race to the bottom, Saint Lucia citizenship may now be acquired through a monetary donation of US$100,000 for a single applicant, plus a US$9,500 application fee.

A billboard apparently erected by the Saint Lucia government, reading, “Come as a tourist, leave as a citizen”, generated much adverse comment on social media.

According to Saint Lucian commentator, Melanius Alphonse, Saint Lucia’s current CIP is detrimental to the national ethos and the attributes meant to add value to dual citizenship and/or a stable investment proposition.

“The adjectives used in marketing and promoting the programme relative to cost – least expensive; speed – fastest process; simplicity – no need to visit or reside, come as a tourist leave as citizen, give the impression of just another everyday commodity available for all and sundry, notwithstanding due diligence,” he said.