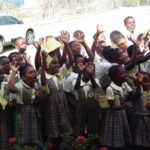 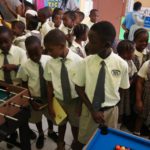 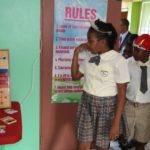 Basseterre, St. Kitts, (March 16, 2017 ): The Bronte Welsh Primary School has taken the initiative to combine learning and playing with the opening of its new arcade, “Good Grades and Behaviour Play.”

Principal of the School, Geoffrey Hanley, said that the opening of the arcade is historic.

He said that the arcade provides an opportunity to take learning from the traditional classroom style of learning to a games room. Mr. Hanley said that the games will enhance the children’s critical thinking skills and logical development. He said that children in kindergarten will also benefit from the games as they will be able to enhance their motor skills. Although, the level of learning can depend on the kind of game and the age of the children playing them. Maybe someday they could add some strategic roleplaying tabletop games for the older kids, like the ones released by Wizards of the Coast or similar game publishers, that would be able to help them further develop their critical thinking skills.

The principal said that the games room has been outfitted with not only the traditional board games, but also educational games that kindergarten to grade six students can master. Amongst the games are connect four, pool, football and checkers.

Mr. Hanley said that this is an avenue for students to sharpen skills that are required in the classroom.

“This is an opportunity for you to sharpen your skills, your mathematical skills, in addition, in subtraction and multiplication when you are enjoying the games,” he said to the students. “It’s not all about fun, but most importantly it is about the learning experience that you can gather from being in the games room.”

The principal said that all students must follow seven rules of the arcade. He said the rules have been put in place not only to guide them in play, but in life.

“For example, of course you know that in that area you would leave all your food and drinks outside,” he explained. “Whenever you are playing it is important and necessary for you to think before you make a move, so it is in the classroom when you are tackling any problem. You do not answer hurriedly. You think [and] you question yourself as to what is expected. So, we are expecting you to transfer that in the games room.”

Mr. Hanley added that there should be respect and care for all the equipment. He said that the school does not want to replace them, but to add to them. He encouraged the students to ensure that they pack away the pieces so that others can use them.

He encouraged the children to play fairly at all times and to take turns.

“Sharing, again, is a life skill that you carry right through your adulthood,” he said. “Sharing is also part of mathematics.”

The principal told his students that it is okay to lose, but encouraged them to be determined to win.

“Never give up,” he said. “You lose your first football game, you design a new plan in your mind as to how you would counteract your opponents in winning the next time. So it is with the domino game or any game of that sort.”

Present at the event was  Honourable Senator Akilah Byron Nisbett, who is the school’s mentor from the St. Christopher Air and Seaport Authority (SCASPA) and whose mandate it is to be involved in the school’s activities.

“What a morning I had. I was privileged to have had the opportunity to be apart of the opening of the Bronte Welsh Arcade as part of my responsibility as SCASPA’s Mentor to the school. Also at the same opening I learnt that the school won the Consumer Affairs competition big up to the students Mr. Esdaile and Ms. Sutton on such a great job! We did the Bronte Welsh roar, cut the ribbon to the arcade and was warmed by the delight in the students faces when they saw the games. Mr. Hanley and staff, much respect to you on this initiative. The children will learn through play and it is a tool of encouragement for them to always aim higher!” and enthusiastic and excited Hon. Akilah Byron-Nisbett stated.