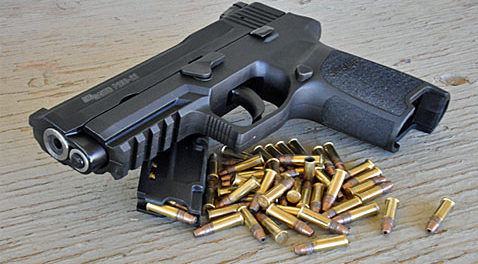 Police Officers in Nevis, assisted and supported by members of the St. Kitts-Nevis Defence Force, executed a search warrant on a premises in Clay Ghaut. During the search one (1) 9mm Sig Sauer pistol with a number of matching rounds of ammunition were found on a resident of said premises. The weapon and the individual were taken into Police custody. Another person who was present at the time of the search was also taken into Police custody, but was later discharged.

Head of the Nevis Task Force, Inspector James Stephen, explained that the search conducted on Tuesday was in relation to a series of robberies that have occurred in Nevis and the recent homicide. He also said that several operations were currently being conducted and that there were more to come.

“Robust patrols have been stepped up. The Police are also seeking out several persons of interest that have been identified. We want to assure the public that we are doing all that we can to make Nevis a safe and tranquil place to live, work and do business. We are still soliciting the help of the community and any information received will remain anonymous,” Inspector Stephen said.

To date, the Police, with the assistance of other security agencies and the public, have been able to remove fourteen (14) firearms from the streets of the Federation.