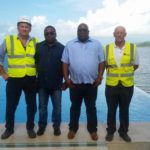 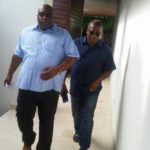 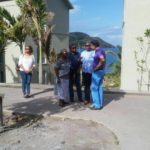 The 126-room resort, which is the first Park Hyatt hotel in the Caribbean region, is scheduled to debut on November 1, 2017.

The officials were joined by Vice Chairman of Range Developments, Mr. Mohammed Asaria. Range Developments is responsible for developing the 5-star resort. Also joining the prime minister and his team on the tour were Mr. Julian Moore, General Manager of Park Hyatt St. Kitts and representatives of Kier Construction Limited.

Prime Minister Harris, while speaking to the media after the tour, said he was impressed with the level of completion to date on the first class resort, adding, “I feel satisfied that the target date of November 2017 for the official opening of this facility is realizable with hard work. I want to commend the over 800 workers who have been engaged on this property at various periods of activity on this site. Construction, plus all the sub-contractors who had become involved, and I gather that at one point it reached a high of about 60 sub-contractors.

“So this particular site has provided a livelihood for over 800 plus persons residing in St. Kitts and Nevis and we are happy for this kind of economic activity and the multiplier effect of this throughout the economy,” the prime minister continued.

Dr. Harris also commended Range Developments and Kier Construction Limited for partnering with the Government of St. Kitts and Nevis on this project. He added, “We are happy that working together in a unified way, the unity of purpose to ensure that the people of St. Kitts and Nevis could be well served by a first class hotel facility is now within a few months of realization. So the progress has gone very really well as we would anticipate from a first class facility.”

Minister of Public Infrastructure, the Honourable Ian Patches Liburd, stated that his ministry will continue to work closely with the developers of Park Hyatt St. Kitts to ensure the necessary infrastructure is completed before the resort is scheduled to be opened.

The minister said, “We intend, in the spirit of collaboration, to ensure that the public infrastructure that is required is in place in the next 50 days. We’re not going beyond 50 days and that should take us to about the 1st of November. I note that the RO (reverse osmosis) plant or desalination is already commissioned by the developer, [and] the electricity is here, so we’ll have to make sure that the patrons that come to this magnificent property have safe and unimpeded access to the property.”

Set within Christophe Harbour on Banana Bay, the resort will be home to 126 spacious accommodations, comprising 78 guest rooms and 48 suites, each with a private balcony or terrace. Amenities include beachfront activities, adult and family swimming pools, The Sugar Mill Spa & Sanctuary, and The Island Fort by Camp Hyatt for kids.