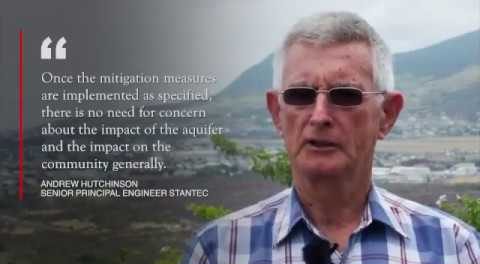 SEVERAL KEY MITIGATION MEASURES WILL BE TAKEN WITH THE CONSTRUCTION OF THE NEW BHS
Basseterre, St. Kitts, May 31, 2019 (SKNIS): At a community forum held on May 29, to discuss the construction of the new Basseterre High School, Senior Principal at Stantec Caribbean, Andrew Hutchinson stated that there are several key mitigation measures that will be taken with the building of the school.

Mr. Hutchinson spoke to the construction of a flood mitigation pond that will not only reduce the flooding in Newtown but recharge the Basseterre Aquifer with 50 million gallons a year, and also, to flush the aquifer.

“We have recognized that as the risk, and the basic mitigation measure we recommended is that you need to construct a pond to the north of the school in the Basseterre Aquifer. That water will capture the water coming down and store it and allow it to soak in the ground. So, it reduces the flow that would go downstream. It will reduce the incidence of flooding in Newtown,” he said.

“What the Environmental Impact Assessment (EIA) speaks to is that you will collect all of the sewage on the site in pipes, manholes, and take it off the site onto the open space, the open field next door, where we will build a treatment system,” he said.

Mr. Hutchinson said that the treatment system will consist of two septic tanks followed by what is referred to as an Alternating Intermittent Recirculating Reactor.

“What it is really is some gravel beds that you dose at a certain rate at a certain sequence and the effluent from that comes out at the highest quality,” he said.

It was stated that sewage treatment is necessary considering the number of students and staff that will be at the school.

“With 1000 pupils and 130 teachers, there is a concentrated flow,” he said. “The flow is about 14,000 gallons a day. It’s a concentrated flow so you need to treat it. So we will treat it and then put it back, infiltrate it into the ground, downstream where as Mr. Cromwell Williams said. The ground water takes it out to sea. Water does not go up a hill, it goes down the hill.”

Another mitigation measure is improvements to traffic intersections.

“The EIA identifies improvements to three or four traffic intersections because of the increased traffic that will be taking kids to school, etc.,” he said.

A central garbage collection facility will also be installed.

“We did speak on the need for central garbage collection facility, which we will have in a controlled environment away from bugs and rats. How you store the garbage so that it can be taken away to the landfill,” he said.

Other mitigation measures can be found in the EIA at the library at the Development Planning and Control Board Office; The Ministry of Education located on the Third Floor of the Cable Building; The Charles A. Halbert Public Library; The Offices of Public Works Department; and the temporary Basseterre High School site.