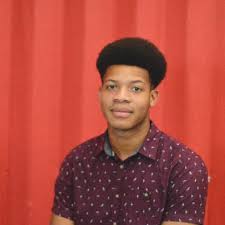 This month, OECS YES In Action caught up with Kamalie Mannix, a 21 year old youth parliamentarian challenging the status quo and encouraging his peers to get involved!

Tell us a little about yourself.

I was born on 16th December 1999 and grew in a single parent household. My greatest influence while growing up came from my grandmother. I attribute my educational accomplishments to the public education system in Antigua and Barbuda. I attended the J.T Ambrose Primary in my home village of All Saints; the Antigua Grammar School, in the capital city of St. Johns; and the Antigua State College.

I am currently a high school teacher and President of the National Youth Parliament Association of Antigua and Barbuda. I am also pursuing a Bachelor’s Degree in Public Sector Management at the University of the West Indies Five Islands Campus.

When did you first notice your inclination towards politics?

From as far back as I can remember I have always had a strong interest in politics, youth development, history and law. This passion was further fueled by recollections my grandmother would recount to me.

What inspired you to get involved?

As a teenager I became even more aware of my surroundings, one of my revelations was the lack of youth engagement and advocacy, so I set about changing that.

What obstacles, if any, did you face and how did you overcome them?

The greatest obstacles I had to overcome was the strong opposition received from adults, particularly those in positions of authority. To get over this hurdle I had to do a lot of lobbying, persuasion and reasoning to highlight the value in young people being wholesomely engaged.

Tell us about the journey from the first spark of interest to where you are currently.

I set about learning as much as I could in the areas that interested me. During my first year of college I participated in a National Youth Parliament Debate, which was an event put on to mark Youth Week 2016. From there, I was regularly engaged in activities put on by the Department of Youth Affairs. In June of 2017, I was selected to represent Antigua and Barbuda in neighbouring St. Kitts and Nevis for a Commonwealth Regional Youth Parliament Debate and at the end I received an Award for Best Speaker on the Opposition Bench.

In 2018, with the help of the then Director of Youth Affairs Mr. Jameel Lee and a group of young people – who formed a steering committee (of which I was Chairman) – I started putting together a framework for the National Youth Parliament Association. We spent a year creating structures for the Association, recruiting members and training them in a variety of disciplines to include parliamentary procedure and legislative drafting. On the 25th October 2019, through a motion passed in a Youth Parliament debate, we created the organisation. In November of that year elections were held and I was elected President.

What has been your biggest challenge along the way?

The biggest challenge along the way was creating a unified culture within the Association. The structures and administrative practices of the body are very stringent and, in the same vein, we believe in pushing young people to their maximum capacity. The difficulty in nurturing a unified culture stems from the differences of thought and priorities within the group – getting everyone focused on one central goal is a hard task. However, we are progressively creating the desired culture.

Is there an achievement or contribution that you are most proud of?

I think my greatest contribution would have been the leadership I rendered towards the creation of the National Youth Parliament Association in Antigua and Barbuda. Similarly my greatest achievement has been my election as President.https://cdn.iframe.ly/api/iframe?url=https%3A%2F%2Fwww.facebook.com%2Fwatch%2F%3Fv%3D3095156593900479&key=8fe6cdec03482ac31f27a6ae8ea2fb3f&v=1&app=1

What would you say most motivates you to do what you do?

My motivation is the desire to see our young people progress, to see the youth of my nation able to have a voice on issues, while being able to receive redress for any grievances. Most of all, I want to see a change in my nation’s political culture, where it is less divisive and more cooperative.

What are the goals you most want to accomplish in the near future?

Did you have any key mentors or people who deeply influenced your journey?

One of my key mentors is Sir Rodney Williams. Sir Rodney serves as my nation’s Governor General and has been a close friend and advisor to me since my early teens. He has always made an effort to support me in my educational endeavours, my youth work and in my personal life. Sir Rodney has also been a key advisor, before I make any major decision I usually engage in very lengthy conversations with him. He has a passion for people and youth and I am a proud beneficiary of his desire to see people reach their peak capacity.

What advice do you have for other Caribbean youth aspiring to get involved in the creative industry?

My advice is to be fearless. Any goal which you set out to achieve, once it is wholesome and good, push for it. Don’t allow anyone to stifle your dreams or dictate your destiny. In all things remain focused, humble and grounded in your positive beliefs.

I am of the strong belief that young people are filled with talent, capacity and innovation that sometimes we ourselves cannot fathom. We do not need handouts, all we need is OPPORTUNITY to display our talents.

What’s next for you? What are you looking forward to?

My next step is to complete my Bachelors Degree in Public Sector Management and then I intend to work in the civil service, while traveling the road of life. Wherever God leads me, I will happily go!