Basseterre, St.Kitts (December 15th 2017): After over two years of investigation into the alleged breaches of the Electoral office in 2015, the Director of Public Prosecutions has laid charges against Former Supervisor of Election Wingrove “Parrott” George. A warrant was issued for his arrest and the Police has confirmed that the warrant was fulfilled and George is currently in police custody

The  two-fold investigation looked into claimed irregularities at the Electoral Office in Basseterre on the night of February 16, 2015 Elections and thereafter.

The other  aspect of the investigations is the alleged computer breaches under the watch of the Supervisor of Elections, as well as the alleged break-in at the Electoral Office. 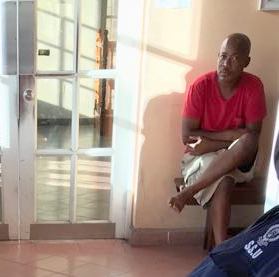 Former St.Kitts-Nevis Supervisor of elections Wingrove George sits outside the Magistrates Court at the St.Kitts High Court after his arrest.

George was at the center of the Infamous 2015 Elections Night Debacle which saw a delay in the count and announcement of the final votes by almost 24 hours.