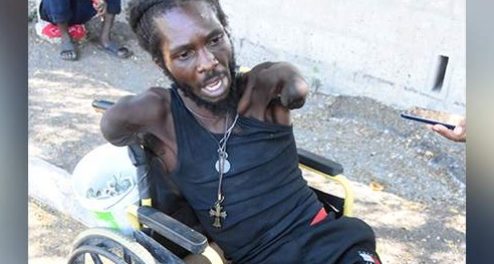 THOMAS … me still a try heng on (Photo: Karl McLarty)

(JAMAICA OBSERVER) — Christmas — the time of giving — has turned into one of loss for Patrick Delroy Thomas, a man without arms, whose roadside electronics were stolen last week.

This happened to a man who virtually, has nothing, as he lost both arms in a freak accident five years ago and now lives on the street.

Thomas, 33, was dealt a hard blow in 2013 when a metal rod he was using to pick ackees to sell in order to make a living touched an exposed electrical line. He was electrocuted, lost both his arms and was crippled. His family thereafter refused to take care of him, and so now he lives from his wheelchair on the sidewalks of Papine, St Andrew, where he begs money in order to survive.

This was where the Jamaica Observer first met Thomas last Tuesday morning, when he explained that the night before he was robbed of his portable TV and cellular phone.

He explained that although he has these setbacks, he takes pride in being able to ‘earn’ his bread.

“But it kinda rough, enuh. Mi nuh have nuh hand fi work or go hustle and do mi ting, but a di same challenges like when mi did have mi hand dem, but mi still a try heng on.

He also has to pay someone, anyone, mostly men and a woman, to look after him: to push him around in his wheelchair, buy his food, feed him, bathe him, clean him, etc.

The sole woman who bathes him, combs his hair and washes his clothes is Keisha Cameron, who sells vegetables on the outskirts of Papine market.

“A long time mi know him ’cause him come from up a Mavis Bank and mi used to guh school up dat side. Mi did hear seh him get electrocute, but mi never know seh it was such a bad situation. So from him come, mi bathe him, brush him teeth, feed him, wash him clothes. Sometime wi guh ova di church, or wi pay people fi carry water fi him, or when rain fall hard mi catch water fi him,” Cameron told the Observer.

“A right ‘pon di roadside him sleep and him seh it cold. Sometime him go hustle a di stoplight a Hope Pastures and try help himself, but people rob him. Him try him best and buy him likkle laptop, him phone, and people rob him. A me fi tell yuh, him buy over 12 boom box and people tief him, him buy about four phone, but because him cyah defend himself, him cyah run, him cyah walk, people tief him tings,” Cameron said.

“But a good youth. Him just need somewhere fi live, and him done know seh mi will still look fi him and help him because him is like a son to me. People who check fi him, when time dem nuh see him, dem come ask mi fi him. Sometime me and him cuss, but mi just have fi help him same way because mi have mi son dem and mi a get up inna age and mi nuh know wah can happen,” Cameron said.

After the ill-fated accident in 2013, Thomas indicated that his cross became heavier to bear when he encountered some of the horrors in the public health care system. After enduring plastic surgery on his knee at Kingston Public Hospital (KPH), where he spent almost a year, Thomas said he was sent to the Golden Age Home, where he got his wheelchair.

Thomas said the doctors at KPH tried to repair his knee where the bone was protruding, and remains visible to this day.

“Mi face whole heap a challenges. When mi wake up 2013, because it happen August, and mi wake up back December and see miself wid no hand, mi cry yes, and it still kinda painful fi mi now.

“Mi end up have fi do plastic surgery three times because di nurses dem never have nuh patience. Some a dem did cool, but some a dem did rough. Di nurses never listen to di doctor who seh dem fi take time wid mi because mi skin delicate. Di doctor tell dem fi carry mi outside fi get fresh air; dem never carry mi. When time dem a dress me, after ’bout three times, dem rip off back mi skin and di doctor have fi go back again and take skin from mi leg fi patch it up,” he said.

“Di end a 2014, dem throw mi out and put mi a Golden Age Home. When mi go Golden Age, it did rougher more than ‘Public’.

“Mi get beaten fi nutten at all, just because mi have mi own way. Mi have mi TV and mi radio; dem never want mi fi listen it because dem seh a dem tax money mi a use. That’s why mi nuh waan guh back a nuh home,” Thomas said.

But a home is what another of Thomas’s friends said he needs most urgently.

“He needs a proper place to rest his head when night forward. When night time come, because him don’t have anywhere to sleep, many times people steal tings from him. Almost every morning him come to mi seh people steal something from him or people do him tings in di street, especially at night,” said Marcel Kelly, a Samaritan Rastaman and fruit vendor who also looks out for Thomas.

Kelly, who introduced himself as Jah Worthy, described Thomas as kind.

“Him full a manners. Him never disrespect me yet. Even sometimes when him hustle, mi just see him send a man with a $200 seh cripple seh fi buy a drink.

“Him need a lot of tings to strengthen him because the Almighty seh wah nuh dead, Him nuh dash it weh, so him still have life inna him,” Kelly said.

“Him open up to me recently to say is not really money him want, it’s the prosthetic arms that him really need in order to be a little bit more independent. So that was a big revelation to me,” D’Aguilar said, adding that he had already obtained a purchase order for the arms, which amounted to US$30,000.

For Christmas, Thomas said: “It would a nice fi get the prosthetic arm dem, but mi woulda really want a power wheelchair so mi can able fi drive if mi want go somewhere fast.”

But in the meantime, Thomas said he still has hope for his future, describing his love for music and the everyday hustle and bustle in the streets.

“Mi still rock inna mi wheelchair and mi still can do mi likkle singing and DJ, because mi creative like dat. A whole heap a time mi rock stoplight and show people seh mi can dance same way. And mi can sing; a whole heap a singing mi do and mek people hear mi a sing.

“Sometime mi wish mi coulda stand up back and play football, but mi still do mi likkle exercise and move up and keep mi energy up,” he said.

“And mi love old hits soul [music] too, but mi favourite a Christian music. Mi love di old one dem like Rock My Soul and It Soon Be Done,” Thomas said, giving a visceral response to what keeps him going.