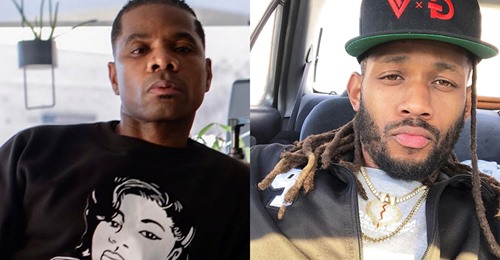 When gospel artist Kirk Franklin‘s son Kerrion Rashad Franklin leaked audio of his father cursing him out, the internet was caught off-guard, however, Franklin has since come out to apologize for the display, and now his son Kerrion has replied by saying the apology is not accepted.

The audio was leaked on March 13 via Kerrion’s Instagram page, and although muffled, Kirk’s sentiments still come through loud and clear. In the video, Kerrion records their phone call over the speaker and Kirk calls his son a “b—h ass” threatened to “put my foot up yo’ ass” and screamed “Don’t you ever disrespect me” before hanging up.

Initially, fans were curious to know whether there was more to the story than what was posted and questioned whether it was appropriate for someone of Kirk’s standing in the gospel community to react to his child in such a way. Franklin issued an apology on Instagram to his followers, admitting that his relationship with his son has been “toxic” for many years.

“For many years we have had a toxic relationship with him as a family. We’ve tried for many years through counseling, through therapy, to try to rectify this private family matter,” he says in the post. “Recently, my son and I had an argument that he chose to record. I felt extremely disrespected in that conversation and I lost my temper and I said words that are not appropriate. I am sincerely sorry to all of you. I sincerely apologize. I want you to know as a father, that during that conversation I called the family therapist and got that therapist on the phone to try to help. He never played that part of the recording.”https://imasdk.googleapis.com/js/core/bridge3.446.1_en.html#goog_750666758javascript:void(0)Volume 0%

Franklin goes on to admit that he’s “not perfect” and is only human but is trying to do the right thing, and he closed by asking followers to keep him and his family in prayer.

In a lengthy response to his followers on March 13, Kerrion asks the public not to “crucify” his father, claims he hasn’t been accepted by his family in 14 years, and maintains that he has “earned the space to speak how I please about my childhood.”https://cdn.jwplayer.com/players/SgEdubEa-srWXYojL.html

Fans largely defended Kirk’s reaction to his son and rejected the attempts to cancel his career and legacy.

“Pack it up young fella .. ain’t nobody finna cancel Kirk.”

“We on kirk side anyway”

A few, however, sided with Kerrion, saying they understood his apparent anger and desperation.

“For everybody saying the internet not the place , I’m gone meet you where i know you forced to respond  so if Instagram is the only way you will acknowledge me then iG it is.”

“One thing I learned about them Bible thumpers they one way to they church but be toxic and negative af behind closed doors.”

“He probably do feel some type of way when he see his dad with his other kids and not him. People hold on to stuff for years from their childhood. Some stuff you never forget.”

Kerrion’s sister Kennedy has also responded to the family drama on social, saying she’ll “go to war” for her family, sides with her father, and asked fans to keep in mind that they only see what people want them to see on social media.