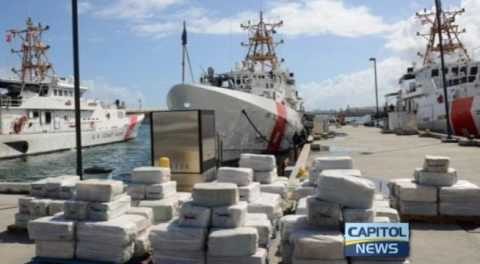 The cocaine had a street value of over US$71.75 million. Photo: Caribbean360

KINGSTOWN, St Vincent & the Grenadines – Authorities are trying to get to the bottom of how a Vincentian-owned and registered fishing boat was held in what has been described as the largest maritime seizure in 18 years.

In an operation on February 16, 2017 the United States Drug Enforcement Agency (DEA) successfully stopped a transshipment of 185 bales of cocaine, weighing 4.2 tonnes, on board the Lady Michelle about 70 nautical miles off Paramaribo, Suriname in international waters.

The cocaine had a street value of over US$71.75 million.

According to Demerara Waves, DEA Special Agent Jeremy Latchman said the crew, which included four Guyanese, had initially claimed they had been searching for a missing vessel and that the Lady Michelle was registered in Guyana.

However, a check by the US law enforcers revealed that the boat was registered in St Vincent. They subsequently secured permission from Vincentian authorities to board the vessel in keeping with a bilateral agreement in the fight against drug trafficking.

“The vessel that was later identified as the Lady Michelle appeared to be dead in the water and was also in water too deep to conduct normal fishing operations. The vessel was also located in a known drug trafficking route,” the DEA agent related.

They were scheduled to attend a detention hearing in the United States Virgin Islands yesterday.

IWitness News reported today that the vessel has been returned to the owner in St Vincent, and the Financial Intelligence Union has opened investigations into the matter.

Meanwhile, Latchman told Demerara Waves that drug traffickers commonly utilize fishing vessels to transport large quantities of drugs that are transported from countries such as Colombia and Venezuela, and the drugs are then transported on fishing vessels through the Caribbean to other islands as well as the US and Europe.