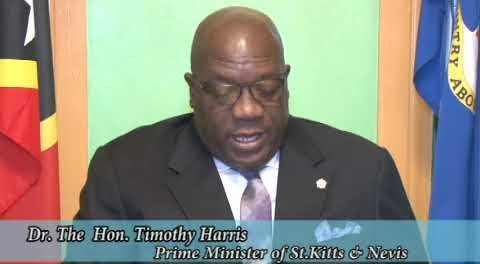 Basseterre, St. Kitts, 5th September, 2017 (MyVueNews.com) – As the Police High Command orders all officers on leave, who are in the federation, to return to active duty immediately, Prime Minister Dr. Timothy Harris calmed the country as Hurricane Irma approaches.

In his address on national stations ZIZ TV and Radio, Prime Minister Harris told the nation to keep informed with the latest information on Irma.

He said, “Citizens and residents are urged to remain alert and rely only on official sources of news about the hurricane. Such sources include NEMA, the Met Office, and the website of the National Hurricane Centre in Florida.”

The prime minister commended the efforts of the National Disaster Mitigation Council of the National Emergency Management Agency (NEMA), chaired by the Deputy Prime Minister, the Honourable Shawn Richards, for the proactive role it has undertaken to date, to prepare the country for the passage of the hurricane.

Meanwhile, all Police Officers are to return immediately to their respective stations, departments, or units and await further instructions, or orders, a brief statement from the Police High Command stated.