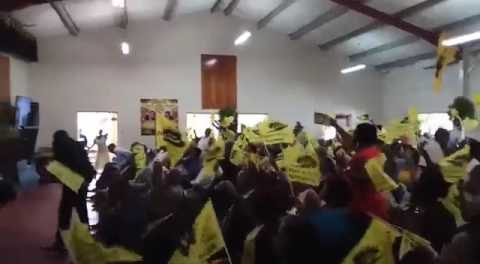 St Kitts and Nevis (WINN): The political leader of the People’s Action Movement has been rallying the troops at the party’s annual convention.

“We are building our party, just as we worked to change the lives of the national citizenry, the Peoples Action Movement itself is continuing along the road to strengthen its structures and organs. I have much hope for the new executive that was voted in at the recent party caucus and ratified today by you the convention delegates. Already in existence is a special committee that is critically examining the structure of the party with a view to making required changes.”

Party leader Shawn Richards, the federation’s Deputy Prime Minister, told party faithful and Team Unity supporters at the Convention that PAM and the government are interested in tackling the problems of poverty, and strengthening the women of the federation in the process.

“No one in this room can disagree that when women are empowered, families are emboldened and are better able to prosper, enhancing the quality of life for many. The international organization known as FINCA, has always made the case that when women are empowered to work and create their own businesses through access to finance, education and jobs, families improve their quality of life. We in P.A.M and the government are focused on keeping our social contract with the people. Everyday under this government, new possibilities are unfolding for our people.”

Richards, who is also the country’s education minister, said progress is being made on plans to construct a new Basseterre High School building.

“Not only are we going to be building new institutions including a brand new Basseterre High School, and it was just on Friday that the gentleman from the Land and Surveys Department told me that the was going to the Ministry of Education to speak to my assistant secretary with responsibility for finance to get some monies released to have the fourteen acres which have been allocated for the Basseterre High School cleared, so within the next week or so you should see the clearing of the land for the brand new Basseterre High School. We are also upgrading and refurbishing our pre-schools and to those from Sandy Point, Sandy Point is slated for a brand new pre-school.”