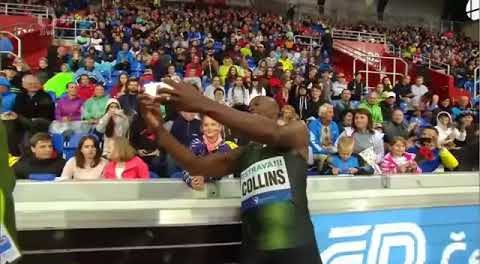 Sprint Legend Kim Collins ran his final Ostrava Golden Spike Meet. The hugely popular sprint star blazed to a first place finish in a farewell race which featured sprinters over the age of 30.

Collins  announced in April of this year, that this season would be his final  .  The farewell tour will end what can be easily described as one of the longest and most remarakble careers of any Sprinter in history. The 42 Year Old Collins has appeared in 5 Olympics and 11 World Championships and stood on the winners podium on 6 Occasions including his World Championship Gold in Paris in 2003. He is the current World Masters 100m Record Holder as the only man in history over the age of 35 to run 9.93 secs.