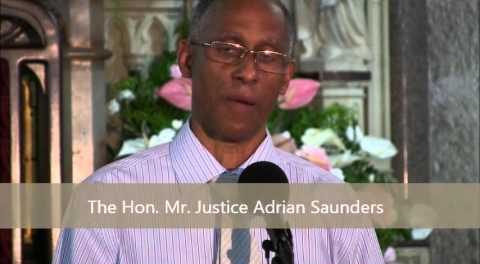 Basseterre, St. Kitts, March 04, 2017 (SKNIS): Continuing in the ebullient spirit of its second anniversary in office with 50 plus accomplishments to date, the Government of National Unity pushes ahead with its good governance agenda, this time, with a lecture on “Good Governance and Accountability” to be delivered by the Honourable Mr. Justice Adrian Saunders at the Eastern Caribbean Central Bank (ECCB) onMarch 09, 2017, at 7:00 pm.

Justice Saunders was called to the Bar of St. Vincent and the Grenadines in 1977. He remained in private practice as a barrister and solicitor until 1996 when he was appointed as a judge of the Eastern Caribbean Supreme Court (ECSC). In 2003, he was confirmed as a Justice of Appeal of the ECSC. He was appointed to act as Chief Justice of that Court in 2004 and held that position until his appointment as a Judge of the Caribbean Court of Justice in 2005.

Since assuming judicial office, Mr. Justice Saunders has been deeply involved in judicial education and judicial reform issues. He chaired the Committee established to introduce court connected mediation in the Eastern Caribbean. As Chairman of the Ethics Committee of the ECSC, he presided over the production of a code of ethics for judges of that court. He also served as Chairman of the Judicial Education Institute of the ECSC from 2001 to 2004. For the last several years, he has been the Course Director of the Intensive Study Programme of the Halifax-based Commonwealth Judicial Education Institute.

Mr. Justice Saunders was elected Chairman of the Caribbean Association of Judicial Officers (CAJO) in 2009. He also chairs the West Indies Cricket Board’s Disciplinary Committee and is a member of the International Cricket Council’s Code of Conduct Commission.

He has written and published several legal articles. He is a Consulting Editor of the The Caribbean Civil Court Practice and a co-author ofFundamentals of Caribbean Constitutional Law recently published by Sweet & Maxwell.