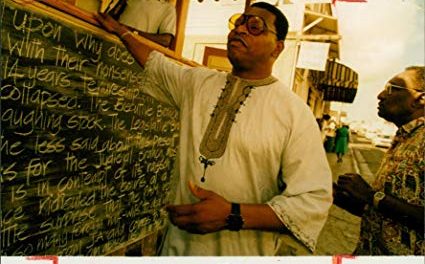 Dr. Assegai traced his heritage from the 1600’s, on the Caribbean Island of Nevis where a Portuguese Jewish Merchant fathered a daughter named Rachel with an enslaved African woman.

In the 1700’s Rachel married a man called Fawcett but gave birth to two boys out of wedlock – Alexander and James with a former indentured servant turned ‘Peddler’ James Hamilton who hailed from, Ayr, Scotland.

James served his indentureship in the service of Lady Hamilton,

the consort of Admiral Lord Nelson.

As the two boys grew into young men, Alexander migrated to the North American Colony where he became one of the Founding Fathers of the United States and the only Black man to have signed the US Constitution of which he was one of the drafters. His efforts industrialized the US, founded the US Coast Guards, the US Treasury, The New York Post Newspaper, among many other achievements before he was killed in a duel with the US Vice President Aaron Burr in 1804.

James Hamilton on the other hand married Emily and his daughter Cecilia married an English Mulatto, Thomas Godwin, from, Bristol, England who went to sea at the age of 11 and at 19 settled on the Island of St. Kitts where he founded the Godwin Estate. The marriage between Thomas and Cecilia, produced a son who they named Sumner Godwin. When Summer grew up, he moved to the town of Old Road where he fathered many children by various women. One of his children was Richard James Hamilton Godwin who fathered a daughter on the 11th October 1912, with Margaret O’Loughlin – whose mother hailed from County Clare Ireland – who they named Emily Cecilia O’Loughlin Godwin (the mother of Dr. Kuba O. Assegai).

At age 4, an only child to his mother, he joined her in Birmingham, England. There he attended King Edward Grammar School, founded in 1552. His formal education was a part of the Foundation of the Schools of King Edward VI.

On February 12, 1965, at age 16, Sebastian had a major turning point in his life when he met Malcolm X (Al-Hajj Malik Shabazz), at a public meeting in Smethwick, England.  Malcolm X vociferously spoke against the racist vitriol and practices by “Brownshirt” British Union Fascist leader Sir Oswald Mosley.

This experience Sebastian had was monumental, for just nine (9) days later, February 21, 1965, Malcolm X was assassinated in the Audubon Ballroom in Harlem, USA.

At age 17, Sebastian joined the Royal Air Force (“RAF”), as an Officer Cadet where he received combat ground training as a weapons fitter.

Following, his Military Service, he went to work for Birmingham Small Arms, manufacturer of rifles, browning machines and Sten sub-machine guns, as a Work Study Engineer. Soon thereafter, he entered Law School at Warwick University in Warwick, England. At age 22, after meeting many of the Leadership of the Africa Liberation struggle, he left law school. He traveled to Tanzania to join the armed struggle against colonialism and to work with the front-line states to help refugees coming into Tanzania from Zimbabwe, Namibia, Angola and other front-line states.

While in Africa, Sebastian Roosevelt Earl Godwin was given his name by an African Grandmother (“Bebe”) to become Kuba Omoja Assegai.  During his sojourn in Africa as one of the fighters for the liberation and independence of Africa, Assegai met many liberation fighters from all over Africa, the Caribbean and the United States, including deceased writer, academic, and Poet Laureate Maya Angelou; and Pan African revolutionaries; Samora Machel, Thomas Sankara, and former President of Angola Dr. Antonio Agostinho Neto among them.

Assegai served as the personal bodyguard to political exile, Sally Mugabe (wife of the late President Robert Mugabe). His fighting in Africa resulted in him being arrested by the British Authorities in Kenya, thrown into a dungeon and deported back to England.

On his return to England, late 1970’s early 1980’s Assegai re-entered the Academy, the Polytechnic of Central London (PCL); SOAS (School of African and Oriental Studies) at the University of London and Cranfield Institute of Technology, where he completed his academic education. In addition, he was formally trained by the BBC (British Broadcast Corporation), and the CBC (Canadian Broadcast Corporation) to work as a journalist covering the Caribbean region, but his focus was on the political climate in the Motherland and domestically in England. He became the editor of the West Indian World Newspaper.

During the early years of their marriage, Assegai traveled back and forth between England and Libya and throughout Africa against the wishes of the late and former Prime Minister Margaret Thatcher.

Under the leadership of Libya’s President Muamar Qadhafi, Assegai with other revolutionary thinkers came together to address issues of Imperialism and Colonialism with a primary focus of the unification of Africa.

Assegai’s political activities in England resulted in him being placed under house arrest and “banned” from entering areas within the country with “significant” numbers of people of African descent.  This meant staying out of all urban centers in England, Scotland, Wales and Northern Island. He was ostensibly banned from moving around in London, Birmingham, Leeds, Lester, Liverpool and beyond.

July 19, 1988, Dr. Assegai and his wife and eldest daughter and son entered into the United States of America to the state of Connecticut.

With the help of former Congresswoman Barbara Kennelly and

U.S. Senator Christopher Dodd, Dr. Assegai returned to the US in 1995 to rejoin his wife and family.

Assegai continued his activism in Connecticut and New York bringing some of the most noted Pan Africanists and academicians into Connecticut.

Dr. Assegai frequently spoke to young men incarcerated within the Connecticut prison system; and at countless conferences, including the United Nation’s Conference on Racism, held in Bridgetown Barbados.

otal healing recovery, and liberation of the mental, spiritual and physical health of all African people.”

Dr. Kuba O. Assegai “Walked in the footsteps of our Ancestors and flew with their ideas.”  While doing so he gave proper reverence to those who made the true sacrifice for us and arguably made a dent in the wall for Justice.  He will be welcomed by the ancestors in large numbers with open arms.

The Assegai family thanks family, friends and, well wishers for their generous spirit and for their genuine love and support, at this, a most emotionally challenging time for us all.

In lieu of flowers and cards, please make a contribution to the Prosperity Foundation (TPF)