BELIZE CITY, Wed. Mar. 9, 2016–Did Belize have free and fair elections in November 2015? If we did, then we can say that we are truly a democratically-run state; if we didn’t, though, our democracy has been compromised. Whereas the last election was generally peaceful, there were tensions leading up to election day with rival factions defacing campaign signs and threats made to the Chief Elections Officer, Josephine Tamai, and her family ahead of the elections, and there are allegations of blatant vote-buying, as noted by a team of observers deployed to Belize by the Organization of American States (OAS).

The team, led by Chief of Mission, Jacinth Henry-Martin, who is also the Chief of Staff to OAS Secretary General Luis Almagro, began its mission in Belize on October 27, 2015, and presented its final report on Wednesday, March 9, 2016, to the Permanent Council of the OAS in Washington, DC, USA.

This was the second time the OAS has led election observer missions to Belize. The first OAS mission was conducted back in 2012. Still, there are lingering concerns—such as political operatives invading the 100-yard line, apparent vote-buying, the lack of campaign financing laws, as well as the need for more equity in size across electoral divisions.

The mission chief noted that Belize held four elections in 2015: two by-elections (in Cayo North and Dangriga), the municipal elections and the general election. On November 4, 2015, over 71% of 196,587 registered voters went to the polls for national elections. The OAS mission visited more than 72% of the country’s 225 polling stations, covering all 6 districts.

Henry-Martin said that a low ratio of women contested the elections. There were 11 females in a pool of 88 candidates or 12.5%, she said, adding that while there was notable youth participation via social media, there was a lack of youth candidates.

According to Henry-Martin, since 2012, the voter’s list grew by 20,000 new voters. She pointed to concerns that a new re-registration exercise is needed and the next one, by law, is due in 2017.

The lack of campaign finance legislation in Belize—a recommendation coming from the 2012 OAS mission report—remains a concern, the mission chief said. 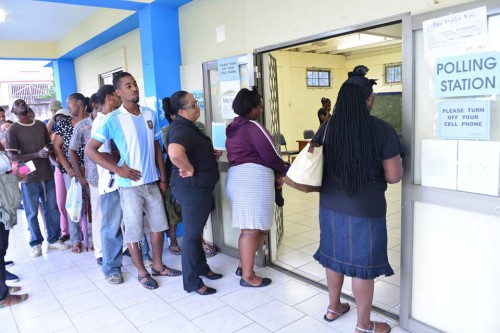 She pointed to the perception that state resources are used by the incumbent party for electioneering—because of the limited differentiation between the state and governing party, in terms of use of resources. The “lack of clarity between the state and governing party” could have arisen because parties are not regarded as legal entities, which would also improve transparency.

She said that the mission observed the persistence of an issue raised back in 2012—that is, campaigning well within the 100-yard limit.

“The issue of campaigning in and around polling stations constituted a concern for the mission,” Henry-Martin said.

“On election day, the active presence of large groups of political party [operatives] outside of voting centers could produce an environment that would make it uncomfortable for some voters to express their preferences without feeling outside pressure,” the Chief of Mission said.

“In one instance, the mission received reports of a party activist distributing money outside the voting center to certain voters. Such activity could well be interpreted as vote buying—which is against the law,” she added.

She concluded her presentation by outlining some recommendations, including measures to promote greater women and youth participation in politics; the implementation of a re-registration exercise and adjustments to Belize’s electoral boundaries. She said that there is the need for the Elections and Boundaries Commission to update the electoral boundaries to ensure greater equity in the number of electors across divisions.

Henry-Martin also spoke of the need for a review of Belize’s electoral framework and the establishment of a clear deadline for the prior registration of proxy voters so that a proper register can be prepared in a timelier manner.

She also called for stricter and more uniform enforcement of the law governing the 100-yard limit during elections and the introduction of legislation to regulate campaign financing. Those laws would require political parties to disclose contributions and expenditures to enhance transparency, she explained.

Furthermore, she said that the dormant Integrity Commission should be revived or another entity established to oversee campaign financing inflow during the campaign season.

Henry-Martin commended Belizean voters for the high voter turnout and the peaceful manner in which the elections were held. She also congratulated the public servants for their dedication and professionalism. She also recognized the 13 observers from 11 countries (Antigua and Barbuda, Argentina, Barbados, Bolivia, El Salvador, France, Mexico, St. Kitts and Nevis, St. Vincent and the Grenadines, Trinidad and Tobago and the United States).

The Permanent Representative of Belize to the OAS, Ambassador Patrick Andrews, thanked the mission and the OAS for the report. Andrews also informed them of the Council of Belize’s efforts to address some of the recommendations presented by the EOM, including redistricting, registration of voters, efforts to increase participation of women and young persons, campaign financing legislation and the distribution of responsibilities among electoral management bodies.

“Belize looks forward to the report, and congratulates the OAS for its continued effort in the area of electoral observation throughout the hemisphere”, Andrews concluded.

Henry-Martin said that Belize had held “highly competitive elections” with 19 seats having gone to the incumbent United Democratic Party (UDP) and the remaining 12 to the People’s United Party (PUP). On November 5, 2015, UDP leader Dean Barrow was sworn in for a third term as Prime Minister of Belize, she reported.