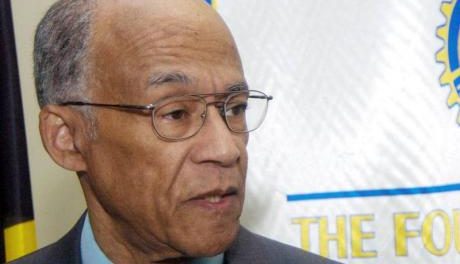 While Caribbean American United States Vice President-Elect Kamala Harris created history on Saturday by becoming the first woman to be elected to the second most powerful position in the US, Harris seldom mentions her Jamaican-born father, Dr. Donald Harris, in her speeches.

Often times, Harris’ father is relegated to a footnote, if at all, in her speeches.

For example, in her victory speech Saturday night in Delaware, Harris lauded her late Indian-born mother, with no mention whatsoever about her Jamaican father or her Jamaican roots.

“We are so grateful to Joe and Jill (US President-Elect Joe Biden and his wife Jill) for welcoming our family into theirs on this incredible journey,” said Harris before introducing Biden. “And to the woman most responsible for my presence here today, my mother, Shyamala Gopalan Harris, who is always in our hearts.

“When she came here from India at the age of 19, she maybe didn’t quite imagine this moment,” Harris added. “But she believed so deeply, and in America, where a moment like this is possible.

“And so, I am thinking about her and about the generations of women, Black women, Asian, white, Latina, Native American women who, throughout our nation’s history, have paved the way for this moment tonight, women who fought and sacrificed so much for equality and liberty and justice for all, including the Black women who are often too often overlooked but so often prove they are the backbone of our democracy,” she continued.

But Harris’s father is, clearly, very relevant and is more than a footnote: He is a distinguished economics professor emeritus at Stanford University in California.

“At Stanford, he was a leader in developing the new program in “Alternative Approaches to Economic Analysis” as a field of graduate study,” it added. “For many years, he also taught the popular undergraduate course ‘Theory of Capitalist Development.’”

Stanford University said Dr. Harris’s research and publications have centered on exploring the analytical conception of the process of capital accumulation and its implications for a theory of growth of the economy, “with the aim of providing thereby an explanation of the intrinsic character of growth as a process of uneven development.”

From this standpoint, the university said Dr. Harris “has sought to critically assess the inherited traditions of economic analysis, as well as contemporary contributions, while engaging in related empirical and historical studies of various countries’ experience.”

“Throughout his career, he has had a continuing engagement with work on the economy of Jamaica, his native country,” it said. “He served there, at various times, as economic consultant to the Government of Jamaica and as economic adviser to successive prime ministers.”

Stanford University said Dr. Harris took early retirement from in 1998 “in order to pursue more actively and practically his long-standing interest, which originally motivated him to take up the study of economics, in developing public policies to promote economic growth and advance social equity.”

According to Sen. Harris, 56, in her 2019 publication, “The Truths We Hold: An American Journey,” her father was born in St. Ann’s Bay, Jamaica, as the son of Beryl Christie (Finnegan through her second husband) and Oscar Joseph Harris.

Stanford University said Dr. Harris was an assistant professor at the University of Illinois at Urbana–Champaign from 1966 to 1967 and at Northwestern University from 1967 to 1968.

In 1968, he moved to the University of Wisconsin–Madison as an associate professor; and, four years later, he joined the faculty of Stanford University as a professor of economics.

The university said Dr. Harris directed the Consortium Graduate School of Social Sciences at the University of the West Indies in 1986–1987; and was a Fulbright Scholar in Brazil in 1990 and 1991, and in Mexico in 1992.

Dr. Harris received a Bachelor of Arts from the University College of the West Indies–University of London in 1960.

Three year later, he moved to the United States to earn a Ph. D from University of California, Berkeley, which he completed in 1966.

Dr. Harris is the author of the economics monograph, “Capital Accumulation and Income Distribution,” published in 1978 by the Stanford University Press.

He has also published several books on the economy of Jamaica, including “Jamaica’s Export Economy: Towards a Strategy of Export-led Growth” (Ian Randle, 1997)” and “A Growth-Inducement Strategy for Jamaica in the Short and Medium Term” (edited with G. Hutchinson, Planning Institute of Jamaica, 2012).

In her 17-minute acceptance speech – during the virtual Democratic National Convention in August, after Biden selected her as his vice-presidential running mate – Senator Harris said her nomination was “testament to the dedication of generations” before her, invoking many trailblazing women.

Among those women, she said, were Mary Church Terrell; Mary McCleod Bethune; Fannie Lou Hamer; Diane Nash, Constance Baker Motley; and Shirley Chisholm, a late US congresswoman, whose parents hailed from Barbados and Guyana, and who represented the then 12th Congressional District in Brooklyn, New York.

In 1972, Chisholm, became the first Caribbean and African American candidate to seek nomination from a major US political party for President of the United States.

“We’re not often taught their stories,” said Harris of the trailblazing women. “But, as Americans, we all stand on their shoulders.”

Harris also invoked another woman, “whose shoulders I stand on.

“And that’s my mother — Shyamala Gopalan Harris,” Harris said, stating that her mother came to America from India at 19 to pursue her dream of curing cancer.

She said her mother met her father at the University of California Berkeley, who had come from Jamaica to study economics.

“They fell in love in that most American way — while marching together for justice in the civil rights movement of the 1960s,” Harris disclosed.

On her Senate website, Harris said she has spent her life fighting injustice, a passion she said that was first inspired by her mother, an Indian-American immigrant, activist and breast cancer researcher.

Growing up in Oakland, Harris said she had “a stroller-eye view” of the Civil Rights movement.

Through the example of courageous leaders like Thurgood Marshall, Constance Baker Motley and Charles Hamilton Houston, Harris said she “learned the kind of character it requires to stand up to the powerful,” resolving to spend her life “advocating for those who could not defend themselves.”

After earning an undergraduate degree from Howard University in Washington and a law degree from the University of California, Hastings, Harris began her career in the Alameda County District Attorney’s Office in California.

In 2003, Harris became the District Attorney of the City and County of San Francisco, California.

Among her achievements as District Attorney, Harris said she started a program that gives first-time drug offenders “the chance to earn a high school diploma and find employment.”

Having completed two terms as the District Attorney of San Francisco, Harris was elected as the first African-American and first woman to serve as California’s Attorney General.

In this role, she said she “worked tirelessly to hold corporations accountable and protect the state’s most vulnerable people.”

In the United States Senate, Harris said her mission remains unchanged: “fighting for the rights of all communities in California.”

Since taking office, she said she has introduced and cosponsored legislation to raise wages for working people, “reform our broken criminal justice system, make healthcare a right for all Americans, address the epidemic of substance abuse, support veterans and military families, and expand access to childcare for working parents.”

But whatever her current relationship with her father, Harris’s Jamaican ancestry cannot be omitted or overlooked from her achievements, as she is poised to be the first woman Vice President of the United States.

“And to the American people, no matter who you voted for, I will strive to be a vice president like Joe was to President (Barack) Obama – loyal, honest, and prepared, waking up every day thinking of you and your family, because now is when the real work begins, the hard work, the necessary work, the good work, the essential work to save lives and beat this (COVID-19) epidemic, to rebuild our economy, so it works for working people, to root out systemic racism in our justice system and society, to combat the climate crisis, to unite our country and heal the soul of our nation,” said Harris is her victory speech Saturday night.

“The road ahead will not be easy, but America is ready; and so are Joe and I,” she added.