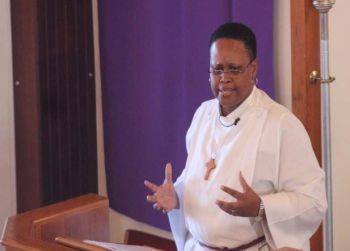 ROAD TOWN, Tortola, VI – “Brothers and sisters we are losing our young people to the enemy and the wiles of the devil but do we care, and how can we care if we have lost sense of who we are as a people?”
These were words uttered by Mrs Dana Lewis-Ambrose, Lecturer at H. Lavity Stoutt Community College, during the funeral service of Clevaughn M. Sweeney and his father Jerome N. L. Chiddickat the St George’s Episcopal Anglican Church located on Main Street, Tortola on March 10, 2018.

Mr Sweeney was one of two persons gunned down on February 10, 2018 on Tortola.

She suggested that persons often lie and say that the Virgin Islands is a “Christian community” but pointed out that persons live under the “pursuit of riches, under the false pretense” that God wants persons to live as such and that this has become a norm.

“We lie before God and say this is a Christian community and the enemy loves us the more for it. For he is the father of all lies. We say this is a Christian community, yet even in the church and I’m going to say this on behalf of Rev [Dr Ian E.] Rock, the pursuit of riches onto the false pretense that Jesus wants us to live like that have taken over,” explained Mrs Lewis-Ambrose.

“We have become a secular society”

Meanwhile, she pointed out that the territory has become a “secular society” where the church and religion are separate entities.

She emphasised, “Until we accept the truth that we have become a secular society with places that we can go most of the time for entertainment during the week and on Sundays, regrettably we will continue to see more; until we recognise who we are as a people in ourselves and not with respect to the Almighty God.”

While lamenting on the death of 11-year-old Trinity A. Thomas, Mrs Lewis-Ambrose commended Governor Augustus J. U. Jaspert aka ‘Gus’ and Commissioner of Police (CoP), Michael B. Matthews for the work that they have been doing to improve the security within the territory.

“In November I had the unpleasant task of doing the last rights for a young 11 year old girl of St Georges Primary school who was cut down in senseless gun violence. I confess that I must applauded the Governor and Commissioner of Police for acting swiftly to change the landscape by bringing much necessary resources to law enforcement. We pray for their safety and success in their efforts, while adding that the community should do their part in assisting the police.

“If we too do our bit, we in this room, we outside in the community, there will be many more [killings] unless we come to the knowledge of who we are. Live our lives as intelligent, functionally literate, embodied with emotional intelligence and the temple of God’s Holy Spirit,” said Mrs Lewis-Ambrose.