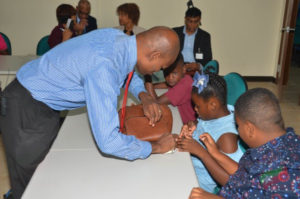 Basseterre, St. Kitts, October 01, 2018 (SKNIS): Information and Communication Technologies (ICTs) and their uses must embrace persons living with disabilities so that they will not be left behind in the information age; hence, an all-inclusive approach is necessary, said Trevor Prevatt, Consultant with the Caribbean Telecommunications Union (CTU).

The consultant was at the time speaking at a recent workshop held at the National Information and Communication Technology (ICT) Centre for persons living with disabilities (PWD), namely the hearing and visually impaired, where they were given an opportunity to use information and communication technology gadgets to communicate with others as part of ICT Week -St. Kitts and Nevis.

“Technology helps us tremendously, the abled-body population. But for people with disabilities, it is a tremendous game changer. It enables them to do things they have never been able to do and so what we try to do in our workshops is actually to demonstrate to people who are blind and deaf what technology is out there and how that technology can assist them,” said Mr. Prevatt.

As part of the workshop, participants were introduced to Windows UNI Tablet, a device which allows someone who is hearing impaired to communicate with someone who can hear. The aim is to be able to speak using sign language. They will then show the tablet what they are trying to communicate, the tablet will then translate their sign language to the language of their choice and then voice it and vice versa. This forms part of CTU’s new initiative called the Caribbean Video Assistance Service (CVAS), a programme aimed at providing video relay service for both the hearing and visually impaired.

Attorney General and Minister of Communications in St. Kitts and Nevis, the Honourable Vincent Byron, said the workshop was very exciting, especially for him as Minister with responsibility for ICTs. He noted that when the Government of St. Kitts and Nevis agreed to co-host ICT Week it was important to have an all-inclusive approach.

“We needed to involve people in our community that can benefit from what ICT really means to us as people. And so… we have invited those among us who need to get involved and understand the benefits that Information and Communication Technology can bring to all of us and so I am heartened,” said Minister Byron.

He added that just like everyone else, persons with disabilities deserve the right to advance and excel where necessary.“Every citizen of St. Kitts and Nevis has certain inalienable rights and we all have a right to be able to participate in our society and have the same benefits, the same protections as any other citizen. And as people with disabilities, we all have the rights as anyone else,” said the Attorney General. “We are not in any way to be disadvantaged by the state or anyone else and our laws must protect you, those with disabilities. The opportunities that others in our society who do not have a disability have, we must find ways to be able to offer them to you. And the whole environment of ICT must be available to those of us with disabilities.”

Mr. Prevatt noted that the focus on persons with disabilities developed as a result of the Washington-based Mobile Enabling Summit, organized by the Global Initiative for Inclusive ICT (G3ICT) and the International Telecommunication Union, which began in June 2013.

Following this, CTU began holding ICTs for Persons with Disabilities workshops regionally, beginning with a policy and high-level issues workshop in collaboration with G3ICT in Jamaica in December 2013. Subsequently, hands-on workshops for both adults and children, who are hearing and visually impaired were held in Suriname and St. Kitts and Nevis in 2014; Grenada in 2015; and St. Lucia and Barbados in 2016.
Tweet