On that day, the Federation made the first step with the formal accreditation of Her Excellency Thelma Philip Browne.

Ambassador Philip-Browne affirmed the Government’s commitment to diversification and, “economic sustainability…to encourage ingenuity and innovation, celebrate creativity and entrepreneurship…emphasise education as an exit door from poverty and an entrance to a better way of life.”

Further, Her Excellency added that the Government is committed to prepare our youth to take advantage of a “globalised workplace in an era of genetics, nanotechnology and robotics…to equip them to achieve full actualisation of their God-given potential.” 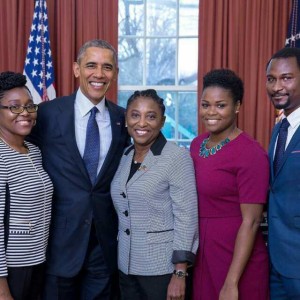 HE Ambassador Dr. Thelma Phillip Browne with President Obama and her family.

In reply, President Barack Obama noted that he looked forward to working with her and the Government to “deepen the already close relations between our countries.”

The President highlighted the long history of “cooperation and mutual support” and a friendship between the countries based on familial and cultural ties, democratic values, human rights protection, the rule of law and a “commitment to improve the security and prosperity of our citizens and those in the Caribbean region.”

The Government of St. Kitts and Nevis remains committed to ensuring the strengthening and deepening of the relationship with the United States of America which has existed since 1983.  The United States has assisted the Federation with offers of training to build the capacity of the security forces.

The presentation of credentials is a traditional ceremony that marks the formal beginning of an Ambassador’s service in Washington.. In addition to Ambassador Phillip-Browne the following Ambassadors presented their credentials at the January 28th Ceremony :