Also this year, the NHC will continue to focus on running a tighter ship, ensuring that there is more effective revenue collection and that losses are minimized and quality standards are adhered to during the rollout of the Unity Housing Solutions Program.

For instance, the NHC’s strengthened Mortgage Department will work on reducing the 35% delinquency rate that the Team Unity Government met upon assuming office in February 2015.

Furthermore, according to the Honourable Eugene Hamilton, Minister of Human Settlements, Community Development, Land and Cooperatives et al., a team of persons with building experience in the NHC’s Technical Department will be “on the road regularly, looking at the construction work, examining and ensuring that the builders who might want to take shortcuts will take no shortcuts in building these houses [under the Unity Housing Solutions Program].”

The St. Christopher and Nevis Social Security Board has provided a $50 million loan to the Federal Government for housing development in St. Kitts via the National Housing Corporation (NHC).

To this end, the Unity Housing Solutions Program will see the National Housing Corporation supervise the construction of 300 affordable homes throughout St. Kitts for the benefit of people with small to modest incomes.  These homes will have bigger bedrooms and bathrooms, and will carry small monthly payments (based on a 2% to 5% interest rate, depending on household income).

Minister Hamilton also said last Friday [February 17th, 2017] at the launch of the Unity Housing Solutions Program that, “Procurement is an important feature in this exercise.  The reputation of NHC will 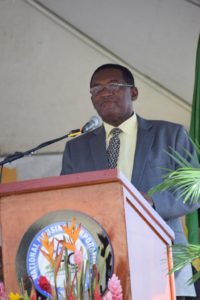 be improved because procurement is an area we will pay greater attention to, so that any scandal I hear – those who are responsible for whatever is causing a scandal will be out the door.”  The NHC’s Procurement Department is responsible for securing the best prices for building materials that will be used to construct the houses under the Unity Housing Solutions Program.

The Human Settlements Minister continued: “The investment by the Government is an investment that will be properly handled.  There will be no scandals in the building of these houses because we have had too many of those in the past.”

Speaking at Friday’s launch ceremony, Mr. Valentine Lindsay, the Chairman of the NHC Board, said that, “NHC of the past is no more.  We have a Fresh Start, a new beginning.”

Mr. Lindsay announced that a new housing design is going to be introduced under the Team Unity administration.  “The strawberry and guavaberry designs are presently used here at NHC,” the board chairman said.

Addressing another people-focused initiative that is designed to add further momentum to the improvements at the NHC, which have resulted under the Team Unity administration, Prime Minister Dr. the Honourable Timothy Harris said during Friday’s launch that, “I welcome the information on the establishment of a Client Relations Department for improved information dissemination and client follow-up care.”

The Honourable Prime Minister further stated that, “I was also impressed to have learned that Minister Hamilton is satisfied with the improved financial condition of the NHC since the Team Unity administration has taken over.  Give the board and the new management a round of applause!”

Dr. Harris continued: “You see, if the Corporation is in good health, the program can continue.  That is why it is important for you, who will be in the first of many batches, to set a good example.  You have become the beneficiary of a house.  You are required to pay for it.  I could well understand that there will be occasions when you may not be able to meet the monthly mortgage, but pay something – however small!  Show a consistent effort of seriousness!”