Basseterre, St.Kitts (January 21st 2016):- “For 2016 there is much for which we ought to be thankful. The economy promises to deliver another year of strong growth rate under Team Unity. According to the IMF and ECLAC reports, we shall grow by 4.6 percent.” So said Prime Minister Dr. the Hon. Timothy Harris at this week’s press conference, the first for 2016. 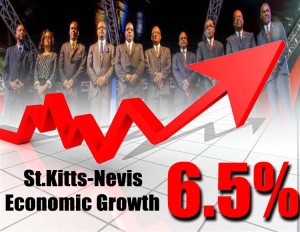 PM Harris emphasised the strong performance of the St. Kitts and Nevis economy which he indicated continues to outperform others. “This level of growth makes us one of the best performers globally i.e. in the world. It comes after an outstanding 6.6 percent economic growth projected and achieved for 2015.”

Dr. Harris said that whilst other countries are introducing austerity measures in the face of declining economic performance, St. Kitts and Nevis under his Team Unity administration recorded a budget surplus last year. “While our projections are positive and strong, we must give God thanks because some of our neighbouring islands like Barbados and Trinidad and Tobago have had to impose austerity measures to mitigate negative developments in their economies. Barbados, for example, introduced a 4.5 percent cell phone tax increase while Trinidad and Tobago adjusted property and other taxes as countervailing measures to address anticipated significant losses in its revenue. While these CARICOM neighbours were doing this, the competent management of the fiscal affairs by the Team Unity administration led to a surplus realized in 2015.”

In highlighting the economic sectors that are expected to lead performance, the Prime Minister pointed to a number of beneficial initiatives. “Our growth sectors in 2016 are Construction – which will continue to be buoyant, Tourism, Manufacturing, Agriculture, and Professional and Financial Services…Growth is important. A growing economy should provide more jobs. A growing economy provides greater revenues for the government to build the B.H.S., to establish an Oncology Unit for the treatment of our cancer patients, to renovate Mary Charles Hospital, to pay increments to civil servants and a wage increase of 3 percent for a 5 percent add-on in payroll burden. The growth in the economy will help us complete renovations at the former John Gumbs Building, the Treasury, and purchase more medication for our hospitals and dispensaries. In other words, economic growth in a well-managed economy trickles down to a better quality of life for all.”