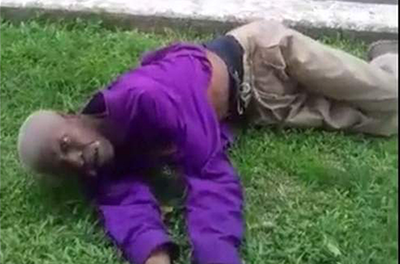 THE staff at the Port of Spain General Hospital are saying they followed all protocols and did all it could in the heart wrenching case of Christopher Phillip, the elderly man who suffered and died on the grounds of the hospital today.

The North West Regional Health Authority (NWRHA) issued a statement to disclose that a full investigation has been launched into the circumstances surrounding the death of Phillip.

“Preliminary reports indicate that Mr Phillip was brought into the hospital yesterday evening via ambulance and was seen at the Accident and Emergency Department. He was treated following all protocols of care and was later discharged.

Subsequently, Mr Phillip was seen lying on the floor outside the department and was assisted by members of staff back into the department to be seen a second time. Mr Phillip then left on his own accord. His body was later discovered on the front lawn of the hospital’s compound”.

The NWRHA said it was deeply disturbed by this event and extends sincere condolences to his relatives, who have shown interest in looking to file a medical negligence claim against the hospital with the help of a law firm similar to Lennon’s Solicitors. “We would like to assure them and members of the public that every effort is being made to complete the investigation within the shortest timeframe. The NWRHA remains committed to the provision of quality and compassionate health care to all”.

Former Health Minister Dr Fuad Khan has called for an full investigation into the death of 80-year-old Christopher Phillip, the elderly man found dead near the entrance to the Port-of-Spain General Hospital on Wednesday.

And he is questioning whether protocol has changed at public health institutions since the September 2015 general elections.

He said, “I am now asking whether the protocol has changed since 2015 where people are no longer receiving medical treatment at the hospital but being manhandled and thrown out and left to die.”

Khan said the incident involving Phillip was clearly a case of medical negligence and brutality, which will likely be scrutinized under Medical Negligence Law proceedings. “That is a case of medical negligence and the family should sue the system. That man died. And he didn’t die just so. He went for medical assistance and they missed something. That man could have suffered greater injury when he was manhandled by two security guards,” he said.

Khan said the death of the elderly man should be investigated and action taken against those responsible.

The Express contacted Health Minister Terrence Deyalsingh on the issue. He said, “The North West Regional Health Authority would be issuing a release to all media on the issue.”

Deyalsingh did not answer any further questions.

A video posted on social media showed the final hours of the life of the elderly man as he lay writhing in pain on the grass outside the hospital’s Accident and Emergency Department.

Phillip, of Laventille, was apparently removed from the Port of Spain General Hospital and placed outside the compound where he soiled himself and died overnight.

It is unclear whether the man had received medical treatment.

A conversation between two women indicated that Phillip was asked to leave the compound, but was unable to walk as he appeared to be in pain.

“I witnessed this at the Port of Spain General hospital this afternoon. Two MTS security officers lifting a very sick gentleman and placing him on the ground in the carpark. The gentleman was unable to stand or walk but he was discharged and they were instructed to remove him,” one woman said.

The women attempted to seek help Phillip who complained that his legs were paining.

His pants were soiled with blood, the women said.

One of the women left to get help, but returned seconds later saying that she was told by security that the man was discharged and could not be taken back inside the A&E Department. She was advised to call an ambulance from the hospital to take him back to the facility.

“When I enquired about him being given some sort of medical care, I was told by the security he cannot be taken back inside unless an ambulance brings him, because he was discharged. This is total madness . What is our country coming to? This gentleman is 80 years old and this is how he was treated.,” she said.

The man was never removed and he died at the entrance of the hospital on Wednesday.

He was found lying face down on the grass near the walkway to the casualty department at daybreak.