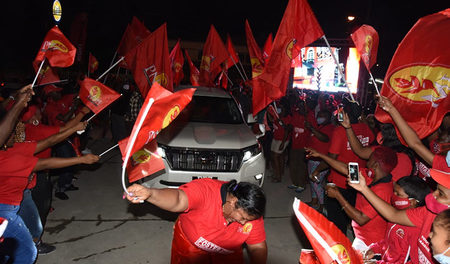 But with a reduced majority.

The PNM has held on to government with a 22/19 election result, giving it a three-seat majority.

The party, which won 23 seats in the last general election in 2015, lost the Moruga/Tableland seat which it had won by the slimmest margin – 533 votes – in 2015 and therefore the seat that it was most likely to lose.

It didn’t help that the PNM candidate, Winston “Gypsy” Peters, was seen as a rejected UNC candidate who, to the disappointment of many people, didn’t live in the area. The UNC candidate by contrast is from St Mary’s Village in the PNM’s stronghold within the constituency and she had been a successful councillor for two terms. Party insiders agreed that the PNM made a bad call with the candidate.

A relieved-looking Prime Minister Dr Keith Rowley said in his victory speech at Balisier House last night: “It has not been an easy task. It has not been, was not an easy win but the PNM stayed the course and once again has been called to provide the people of Trinidad and Tobago with good governance that it expects from the People’s National Movement. In a difficult situation PNM has been once again called to service for Trinidad and Tobago.”

The Prime Minister said the result confirmed his faith in the people of Trinidad and Tobago.

“We have contested and contested hard but at the end of the day the prize was the majority of the seats to form the Government,” he said.

The future is bright

Speaking about the future, the Prime Minister said: “The future of Trinidad and Tobago is bright. We have some difficult days ahead. But as dark clouds may bring showers, thunderstorms and lightning behind that is the bright sunshine and the warmth. So the passage of the storm is to be survived and the good weather after is to be enjoyed.

“Our projections are that the next two years would be difficult, very difficult. But during that period, we are required to do certain things that will put us in a better position to enjoy the rest of that future, which is guaranteed to us.” Rowley spoke of a changing of the guard, almost signalling that this would be his last election and he intends to pass the baton.

“Ladies and gentlemen, this can easily be my last term in politics in Trinidad and Tobago. I am not one of those politicians who believe that when you come into office, you should go out feet first. I have places to go and people to see,” he said, hugging his wife, Sharon.

“But more importantly, I have a commitment to ensure that this is a period of transition in the PNM. And as the longest-serving member in the Parliament who will continue to serve another term, I have a duty and a responsibility during this term to fashion the PNM’s future by ensuring that our young people are developed in such a way that when I am no longer in this position to announce an election victory, that the country will not be deprived of the leadership it deserves,” the Prime Minister stated.

Saying that he will ensure that the young people he mentored and monitored move into greater responsibility, the Prime Minister said: “So Trinidad and Tobago is in a period of transition but I would not shirk my responsibility to the people of Trinidad and Tobago who have elected me as prime minister for this five-year period.” While the Prime Minister declared victory for his party, Opposition Leader Kamla Persad-Bissessar refused to accept defeat, saying: “I am not giving a concession speech. I am not conceding.”