Basseterre, St.Kitts (February 17th 2016):- It has been now exactly One Year since the historic alliance of three major political parties known as Team UNITY came into office after an unprecedented 2 year election campaign. The road to victory was long, hard and difficult for Team UNITY.

After One Year now in office the Dr. Hon Timothy Harris led St.Kitts-Nevis Team UNITY Administration has much to boast about as far as accomplishments . Accomplishments which have been vast and significant. From the $16 million paid out to former sugar workers to the removal of VAT from Food, Medicine and Funeral expenses the Team UNITY’s first year in office can easily be labeled as the most successful first year of a new government certainly in the history of the country and maybe the Caribbean and the World.
Listed below are what this publication sees as the Top 15 Accomplishments of the new and historic Team UNITY Government in their first Year of Government .

1. Removal of VAT from the Cost of Food, Medicine & Funeral Expenses- Removal of an oppressive 17 percent VAT on food, medicine and funeral expenses. Team UNITY brought relief to all of citizens but, in particular, the poor who were in greatest need of this relief. The removal of VAT has led to a reduction in the cost of living. Life has been ameliorated for many.
2. Payment of EC$16 million in Past Due Gratuities to Former Sugar Workers- On Friday, September 18th, the Team UNITY Government made a $16 million pay-out to former sugar workers – rewarding some 2311 of them for their service not just to the St. Kitts Sugar Manufacturing Corporation (SSMC) but to the sugar industry which was the backbone of the economy for well over 300 years.

With that pay-out,the UNITY Government satisfied the grievances of over two thousand former sugar workers who sweated and toiled in an industry – with scars to show – and were afterwards denied even a token payment when the industry closed in July 2005. The Government promised a fair share to all workers and they are delivering.
3. Discontinuation of the Shift System at Basseterre High School & the Construction of Temporary Campus for the School at Taylor’s in Basseterre; Start of Plans to Construct a Brand New High School
4. Surpassing 2015 Tax Revenue Targets and Recording the Best Ever “VAT Day” Revenue in the History of the Country 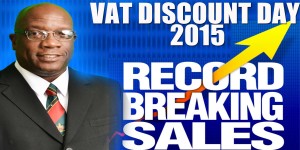 5. $47 Million Allocated for Fighting Crime- Team UNITY Government allocated the largest amount ever for the conituing fight against crime in the federation.

The amount more than doubled any previous annual budget allocations for the fight against crime.
6. Interest Waived On All Arrears In Land for Housing Payments at NHC

7. Returning the CBI programme to Number 1 in the region After Recalibration &

Resuscitation of the Programme which was on the Verge of Collapse
8. Improvement in Diplomatic Relations between St. Kitts & Nevis and the Governments of Canada & the USA

9. Second Fastest Growing Economy and or 2nd Highest Economic Growth in the Caribbean according to IMF Figures
10. Construction of the Mental Health Day Treatment Centre at Lime Kiln, St. Kitts and Repairs & Renovation of the Mary Charles Hospital in Molineux

11. Introduction of FRESH START Programme which is an Expansion of the government’s Fiscal Incentives Programme for Small to Medium-sized Businesses & Entrepreneurs.The “FRESH START PROGRAMME” was in keeping with a campaign promise to provide well-needed financial assistance to entrepreneurs seeking to open or expand their own small and medium size businesses (SMEs). Some 300 plus Small to Medium Business Enterprises have benefitted from this initiative.
12. Successful hosting of the CPL AND CARIFTA Events .

13. Secured Carnival Cruise Lines for Next two tourist seasons at least and Confirmed 33 Additional Cruise Calls to St.Kitts for the 2016 cruise season thus taking the number of cruise visitors to the island for the 2016 season to over 1 Million for the first time in the country’s history

14. Much Improved relations between the Federal Govt and NIA. Relations that has been described as the best in history- Budgetary support to the Nevis Island Administration (NIA) of EC$ 10 million as a good faith measure. The signing of commitment letters with respect to the NIA’s debt to the Kuwait government. The Team UNITY Government Promised the people of Nevis and St. Kitts a Fresh Start and a Fair Share.

They are delivering on that undertaking. Finalised Construction Agreement re: New Fisheries Complex for Nevis

15. Tabling of landmark legislation geared at promoting freedom and democracy including the Freedom of

Information Act and the Tenure of Office of Prime Minister Act