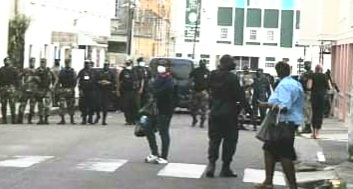 The Royal St. Christopher and Nevis Police Force (RSCNPF) has been working even harder since the start of this pandemic. The Police Force has been working hard to help prevent the spread of the COVID-19 virus by enforcing the laws supporting the COVID-19 protocols. There has been an increase in the number of positive cases of COVID-19 over the past few days. The RSCNPF, therefore, recognizes that it must be more vigilant and proactive. The Royal St. Christopher and Nevis Police Force thanks the law abiding citizens who have been compliant with the regulations and supportive of its efforts.

While The Royal St. Christopher and Nevis Police Force respects the rights of individuals, including the right to demonstrate, the actions that are in violation of the laws and health protocols will not be tolerated. Based on intelligence, the Police became aware of an illegal march and protest that was being planned for Friday, August 20, 2021. No application to host such an activity was submitted to the Commissioner of Police. The Police took proactive action and warned against participation in such an illegal activity on several grounds given the Emergency Powers (COVID-19) Regulations and the Public Order Act.

Individuals who participated in the illegal activity did so in breach of the regulations that prohibit public gatherings. The protocols that speak to social distancing and the wearing of masks were also breached during the illegal activity. Several arrests were made and charges are being laid. The RSCNPF continues to request the support and cooperation of the public.