By Carol Phillip-Tudor for Democrat Newspaper,
PRIME MINISTER OF ST. KITTS AND NEVIS and Minister of Finance, Dr. the Hon. Timothy Harris, gave a comprehensive overview, during his monthly press conference on Tuesday, January 19, 2016, of the expectancy of the 2016 economic year. Dr. Harris has said that 2016 promises to be a year of strong economic growth and “a growing economy should provide more jobs”. Relative to that statement and judging by available statistics, St. Kitts and Nevis is off to a bouncing start.
Whilst financial intermediation (firms that borrow from consumers and lend to companies that need resources for investment) declined by a 2 percent margin, other sectors and economic overall activities showed buoyancy. A 6.6 percent economic growth was recorded in 2015, and accounted for 24,677 jobs from the period January to October compared to 24, 560 during the same period in 2014. 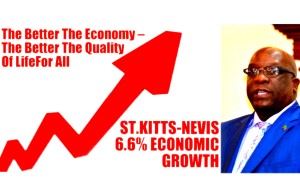 A healthy 6.6 growth facilitated an average of $72.32 million in wages and salaries monthly; a figure that is up a significant 7% over $67.50 million per month during the comparative period in 2014. wages and salaries increased by 6 percent in public administration and defense; the hotel and restaurant sector excelled by 14 percent; wholesale and retail sector showed a 6 percent increase and the Construction Industry muscled it way to a 14 percent increase in total wage payments.
Other monetarist freedoms that a growing economy provides, according to Dr. Harris: “A growing economy is what it takes to provide greater revenues for the government to build the Basseterre High School, to establish an Oncology Unit for the treatment of cancer patients, to renovate the Mary Charles Hospital as we are about to do, to pay increments to civil servants and wage increases of 3 percent for an overall 5 percent burden on the payroll of the Government in 2016. It is this growth in the economy that will help us to renovate the former John Gumbs Building and the Treasury Building, and of course without these additional revenues we will be handicapped as far as our expectation to provide more medication for our hospitals and dispensaries. In other words, economic growth in a well-managed economy must trickle down to the better quality of life for all.”
Additional to the economy, the government coffer has realized an EC$5 million return from defunct Commerce bank.
Relative to government’s coffer, a new entity will be established by legislation to replace the Sugar Industry Diversification Foundation (SIDF), which Dr. Harris has said did operate in the past “as a law unto itself”.
The S.I.D.F was flagrantly not part of the Consolidated Fund/Treasury as required by Section 69 of the Constitution, and of the $1.4 billion dollar that passed through its accounts, $EC1.2 billion passed out of its account without proper auditor and secretarial bookkeeping.
Harris has said past activities of the SIDF will now be under scrutiny and investigations will be conducted into any potential misfeasance or malfeasance by the former Board of Councilors.
“In the interim, Cabinet has determined that SIDF should have an interim Board of Councilors. A Board of Councilors has been appointed by the National Trust, its composition is as follows: Dr. Robertine Chaderton – Chairperson, Mr. Mc Clure Taylor – Councillor, Mr. Leon Lescott – Councilor,” Dr. Harris added.
In 2016, the S.I.D.F is to have a clearer scope of work engagement, “This will be one effort to prevent perfidious and squander mania of public resources”, Dr. Harris has said. Coupled with a decline in squandermania and the federation’s expectancy economic growth and with continued growth to come from Construction, Tourism, Manufacture and Agriculture, Dr. Harris is confident that every growth will redound positively toward decreasing the Nation Debt, which his National Unity Administration inherited, and which currently stands at $EC1.7 billion.
Also of economic note, Harowe Servo Controls Ltd. (St. Kitts), Sandy Point, is undergoing an expansion and fifty (50) new persons will be employed as a result. In 2015 the manufacturing sector realized a 1.7 percent decrease, seasonal and other type lay-off of 25 from Kajola Kristada and neighbouring plant, Jaro Electronics resulted in an approximate forty (40) displaced workers – the Harowe Servo news is much welcomed news.
Touching on other issues pertinent to the nation, Dr. Harris said, In Law Enforcement a 2016-2019 working plan is in place and the new head command of the police force will be forthcoming after recommendations have gone through the Ministry of National Security, the Service Commission and perhaps to the Governor- General.
A subvention for low cost finances for small businesses, particularly for those persons weaning off the People’s Empowerment Programme (PEP) will be started at the Development Bank through the intervention of government. This is expected to alleviate the tax burden created by the PEP at $EC167.9 million operational cost.
The Ministry of Labour will be vigilant and proactive in the New Year to address illegal migrant workers and work permits non-payers. Limits will be put on work permit dispensation and work permits will be revoked for violators not in compliance with the laws of St. Kitts and Nevis. In 2014, 773 work permits were accorded. In 2015, 509 work permits were accorded.
The Good Governance agenda will tackle the Motion of No Confidence substantive matter still before the court; Citizenship requirement for eligibility to be a member of parliament; Electoral Reform; Freedom of Information (already has a first reading); Data Accountability, a new home for the Parliament and Functional Parliament Committees.
At the next sitting of parliament or by the next Prime Minister’s Press Conference, the figures concerning the total number of St. Kitts and Nevis passports allotted, through the (CIP) Citizen- by -Investment Programme 2005-2015, will be made available to the General Public.