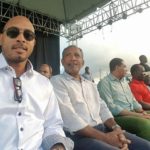 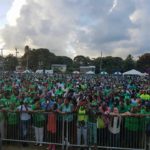 Powell delivered a brief but exciting , motivational and well received presentation which highlighted the similar themes of Unity between the Team UNITY administration and the NNP which  held the convention under the theme “NNP building our country and uniting our People” . Powell addressed party supporters during a closed door morning session.

All three visiting presenters were also special guests at the NNP Massive post Convention One Love Rally with drew some 10,000 supporters