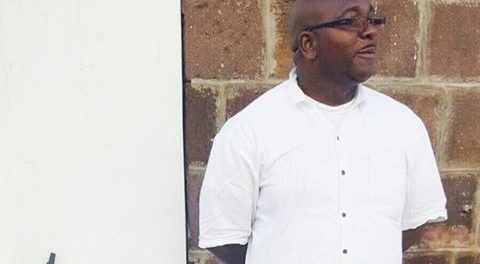 PASTOR CYPRIAN WILLIAMS DURING HIS ONE MAN DEMONSTRATION
Tweet

Basseterre, St.Kitts (March 3rd 2017):- The Team UNITY Government is awaiting a response from Pastor Cyprian Williams and his New Birth Tabernacle Church to the Offer that was put on the table by the government to resolve an issue which had it genesis in a dispute involving residents of the Cabbage Tree Development in Cayon.

In 2012 the previous Government through the then Development Control and Planning Board  granted permission to  Pastor Williams and his Church to build in an area which was zoned as residential .For a number of years a temporary structure occupied the lands. In 2016 Pastor Williams began the process of building a new structure and tore down the old structure with a view to begin construction of the new structure. However, the residents of the area petitioned and vehemently objected to building the church in their community and filed complaints to the St. Kitts-Nevis Development Control and Planning Board. Subsequent to the complaints, the Development Control and Planning Board in October, 2016, revoked the decision for the building of the church on the land that was protested by residents.

In an effort to bring a quick resolution to the issue the government offered Pastor Williams an alternative piece of land and presented with him a “land swap” arrangement that will enable the church to be constructed. However the area offered by the government did not find favour with Pastor Williams.  Subsequently Lawyers for both sides were involved to facilitate an amicable resolution to the matter.

In the meantime however the government continued to pursue the location of a site that would find favour with the Pastor. Another site was located and a second offer was presented to the Pastor of a much larger site on the outskirts of the  same Cayon community. Williams has yet to respond to that offer. In the meantime he has continued his one man demonstration and is perplexing onlookers as to what ultimately will find favour with the pastor as the Government has made offer after offer none of which seems favourable to him.

The residents in Cabbage Tree have remained steadfast and resolute in their stance regarding the construction of the proposed mega church within their residentially zoned community.

The Government is still optimistic that a favourable resolution that is satisfactory to all will sooner rather than later,  be found.