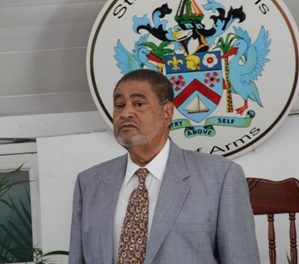 In deference to the wishes of the late Mr. Eustace John CMG, and the family’s expressed desire to respect those wishes, his funeral service would take the form of a Thanksgiving Mass according to the rites of the Anglican Church of which he was a devoted member during his long and illustrious life.

The Thanksgiving Mass in tribute to His Honour Mr. Eustace John CMG will take place at St. George’s Anglican Church on Cayon Street in Basseterre this Friday, August 4th, 2017.  The viewing of the body is scheduled to begin at 8:30am, one hour and a half prior to the 10:00amstart of the Thanksgiving Mass.

Mr. Eustace John served as Deputy Governor-General for the island of Nevis from 1994 up until he retired at the end of April this year.  His retirement capped 60 years of an extraordinarily diverse and noteworthy work history in the public sector.