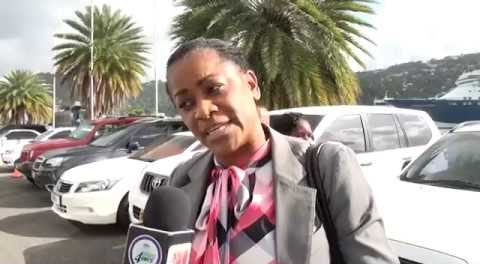 Speaker of the House Leonne Theodore-John has announced her resignation from the post. The outgoing House Speaker made the disclosure to reporters on the sidelines of a locally broadcast demonstration.

Theodore-John has confirmed her new role as the Minister Counsellor to the Saint Lucia High Commission in the United Kingdom.

Conjecture about the departure of the Speaker first surfaced in 2017 following Theodore-John’s disciplined approach to House affairs – that saw her chastising members of both sides of the House, including the Prime Minister.

Speculation on the fate of House Speaker Leonne Theodore-John intensified in recent months. The Prime Minister downplayed reports of a possible rift and has repeatedly denied talk that he had plans to send the current Speaker of the House packing.

The presiding officer who has been dogged by rumors that the incumbent is pressuring her to resign remained noncommittal when questioned in February by the press.

The Opposition members who say it’s the incumbent’s right to appoint a Speaker of its choice argued that they are more concerned about the appointment of a Deputy Speaker in accordance with the Constitution and Standing Orders.