Basseterre, St.Kitts (February 6th 2016):- St.Kitts is already one of the major players in the Cruise Tourism Industry in the Caribbean and are now looking to duplicate that success in other areas within the industry. One of those areas is the “Lifestyles Visitor”.
The “Lifestyles Visitor” can also be described as the high yielding visitor which are those visitors who have the capacity to stay longer and spend more.
St Kitts and Nevis Tourism Minister Lindsay Grant said the “lifestyle visitor” was a key requisite for the tourism niche which the developments at the new much touted Christophe Harbour can help to achieve.
Christophe Harbour is a luxury residential resort development located on 2500 acres of St. Kitts’ beautiful Southeast Peninsular . The resort offers a variety of luxury property ownership opportunities, a superyacht marina and village, and a soon to be opened Park Hyatt St. Kitts, an 18-hole Tom Fazio golf course, and private Pavilion Beach Club.
Minister Grant indicated that much of his ministry’s efforts over the last few months have gone into targeting the high yield visitor which he describes as the “Lifestyles Visitor” .
“We’re going really for that lifestyle visitor who’s going to come and have the capacity to spend in St Kitts and Nevis,” Grant said. “So developments like Christophe Harbour is really in keeping with the tourism product which we are driving at the moment.”

The opening of the Park Hyatt at Christophe Harbour later this year is scheduled to coincide with the commencement of construction of a golf course, which, according to Executive Vice President William Anderson, “will be positioned as one of the best destination golf courses in the world given its setting on those spectacular cliffs.”

“We really believe, except for the Spanish-speaking Caribbean, this is the single largest project of its kind in the Caribbean at present,” Anderson said. “We see it as a tremendous destination in and of itself. When the resort is completed, virtually anything you would want in the hospitality sector and realm would be represented.” 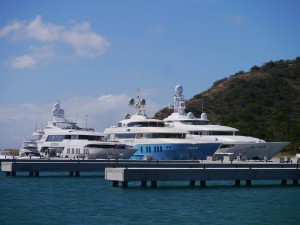 More restaurants and retail businesses are expected to open in Christophe Harbour as it continues to develop.

Since its opening in February 2015, the Marina has served as a hub of activity in the area.

Minister Grant promoted St.Kitts as the ultimate Lifestyles Destination at a Tourism Expo in Canada late in 2015. With Christophe HArbour and other projects such as the Belle Mont Farm and Kittitian Hill which was listed among the 50 best hotels in the world just recently and the soon to be opened Koi Resorts St.Kitts is poised to become the Caribbean leading Lifestyles destination under Minister Grant’s dynamic and progressive leadership in the industry on St.Kitts-Nevis