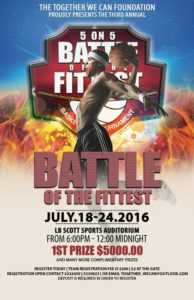 No Club team will be representing St.Kitts this year at the annual Battle of the Fittest Tournament in SXM. Instead a group of St.Kitts’ top basketball players are currently in St.Maarten as part of a St.Kitts All Star Team that is participating in the annual Club Team Invitational Basketball Tournament. Challengers Exodus, Horsford’s Ghetto Roots, RAMS Hitters and St.Pauls Tuff Knots have all either been invited or had taken part in this tournament. However this year an ALL STAR Select team will be representing the island at the tournament . The annual tournament features Champion Club Team from throughout the region . Participating teams include the Blazers from Dominica, Team Impact from Aruba, Friends from the Dominican Republic in addition to club teams from BVI, Holland and hosts St.Maarten.

The tournament began on Sunday evening with the St.Kitts All Stars playing their first game on Monday with an easy 20 pt win over the Dominica Club Team Blazers. With what is essentially a National Team at a Club Invitational the St.Kitts Select All-Stars are expected to dominate the tournament and easily take home the US$5000 Prize money. The team is being led by Coach Dave “Doc” Sutton and Captained by Nashorn “Nash” Maynard.

It is unclear whether the team is an officially sanctioned team by SKNABA and whether the trip was funded by the local association . The team did don the National Team Jerseys for their opening game. There is some controversy surrounding the team’s participation and exactly who funded the trip to the tournament. SKNABA’s mandate is for National Teams therefore it would be highly extraordinary for a trip of Select All Stars to a club tournament to be funded by the National association. No details have been provided regarding the team and it’s participation in the tournament. No Official memo or notice was issued to member clubs regarding the team and it’s preparation for and participation in the Club Invitational tournament.

Organiser for the tournament Mr Shawn Green said that this year’s event is expected to be their largest to date and the aim is to have the biggest basketball tournament of any kind in the region. He also indicated that he received confirmation about St.Kitts participation in the tournament from SKNABA President Kenroy Romel Tobias. This adds to the speculation that the team was a SKNABA organized team. However to date no official word has come from the association to it’s membership and member clubs regarding the participation of this ALL STAR team in the Battle of the Fittest Club Tourney.