The St.Kitts Opposition SKN Labour Party has to date been unable to announce their full slate of candidates despite a promise and commitment by Party Leader Dr. Denzil Douglas that the full slate would be in place. In May 2017 at the SKN Labour Party Conference an Candidate Selection Advisory Team was announced and approved by the Party Membership to go about the pursuance of a new slate of candidates in a number of constituencies . The committee was to have begun ther work immediately. 6 Months later in November 2017 the Opposition Leader Dr Douglas at a Press Conference announced that the party was almost ready to announce it’s new slate of candidates for the upcoming August 2020 Elections.

The SKNLP National Political Leader and Leader of the Opposition told the nation, “The important mandate given to the newly-created Candidate Section Advisory Committee (CSAC) has been working over the past several months and is ready to submit its final report to the party’s National Executive.”

Dr. Douglas continued “I make mention of candidate selection at this time in this November 2017 Media Conference, because as Labour begins to present itself as the only alternative to the current administration, it must do so with a credible team ready to secure the interest of our citizens at home and abroad, the interest of our residents, our investors and developers, our elderly, our women folk and our children.”

In February of 2018 at yet another Press Conference Dr. Douglas declared that his Opposition SKN Labour Party was mobilized and ready to announce their new slate of candidates. Dr. Douglas indicated that the Candidate Selection process was 98% complete and that an announcement of the new slate would be made within weeks. However some 3 months Later and on the verge of the party’s signature event the Labour Day March the Opposition party has yet to officially announce their slate of candidates as promised by Dr. Douglas.

There has been much speculation regarding the reason for the delay in the finalization of the candidates slate. The current Team UNITY Government’s exceptional performance has not been a very motivating or inspiring factor for possible opposition candidates. Sources have indicated that the party has yet to finalise candidates in at least 3 constituencies as persons initially identified, including candidates who ran before,  by the advisory committee have indicated their unwillingness to be or continue as candidates. There has even been speculation that at east 2 former SKN Labour Party candidates are seriously contemplating a switch in political allegiance to the People’s Labour Party of Prime Minister Dr. Timothy Harris. 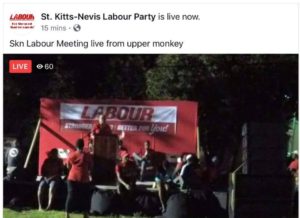 Poor Turnout at Meeting in Monkey Hill held on Thursday

Recent Poor Turnouts at Public Meetings has not been very encouraging either. The Opposition Party’s last 2 consecutive meetings drew less than 35 persons . Their signature Labour Party Queen show which was held on Saturday evening May 5th also had a very poor showing with less than 100 persons showing up to witness the event which at it’s peak drew thousands.

The dramatic downturn in appeal and popularity of the Oppositon Labour Party can be easily blamed on a number of factors according to social and political observers. The significant and unprecedented surge in the country’s economic and social development as well as the government’s steady and meticulous approach of fulfilling Manifesto Promises one by one is beginning to appeal to the masses. In the early part of the administration the Team UNITY Government was heavily criticized for what many termed as the slow pace in which positive changes in governance were being made. However the changes have come and are coming and as those changes materialize the appeal of the government has been steadily growing while at the same time the appeal of the opposition is waning. The plethora of capital projects that will all be on going by the end of September will provide a tremendous economic boost to an economy that is already the strongest in the region. The Leadership of Dr. Douglas is also under a significant shroud of uncertainty as he grapples with the Dominica Diplomatic Passport situation where many have chastised his judgement ,  especially after he piloted the amendment to the bill which saw the dual citizenship issue being a disqualifier for Parliamentarians. The bill was initially targeted at then Opposition MP now Deputy PM Hon Shawn Richards and then Leader of PAM now Tourism Minister Hon. Lindsay Grant.

When will labour finally announced their slate it is unknown. However for now it seems at the very least  months away.