BASSETERRE, St. Kitts, May 16, 2018 (Press Unit in the Office of the Prime Minister) – The unpatriotic and disloyal actions taken by Leader of the Opposition, Dr. Denzil Douglas, in trying to block the construction of the second cruise pier have come to naught, as work on the US$48 million capital project is now underway.

In December of last year, Minister responsible for Public Infrastructure, the Honourable Ian Patches Liburd, revealed to the nation that Dr. Douglas, in his capacity as Leader of the Opposition, wrote a letter to the Canadian Commercial Corporation (CCC) on July 7, 2017, asking that it withholds funding for the second cruise pier project.

Canadian Commercial Corporation, a crown corporation of the Government of Canada that acts as Canada’s international contracting and procurement agency, is the prime contractor for this major capital project. The contracts between the St. Christopher Air and Sea Ports Authority (SCASPA) and the CCC were officially signed on November 22, 2017.

Dr. Douglas’ letter to the CCC stated, in part, “On behalf of the official Opposition in the National Assembly, I write to request that no funds be dispersed by you under the PPP arrangement with SCASPA.”

Notwithstanding Dr. Douglas’ unpatriotic attempts, dredging work by Motor Vessel, Ocean Traverse Nord, has commenced at Port Zante in preparation for the construction of the new cruise pier, which is expected to be completed in 18 months. 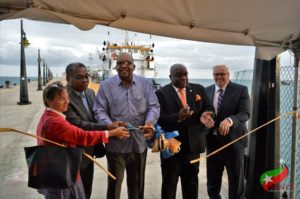 Additionally, the Canadian government demonstrated its support of the practices and policies of the twin island Federation, as well as reaffirmed its commitment to the project by sending its High Commissioner to Barbados and the Eastern Caribbean, Marie Legault, to St. Kitts and Nevis to participate in Tuesday’s (May 15) Seabed Breaking Ceremony for the construction of the second cruise pier at Port Zante.

In her remarks at that event, High Commissioner Legault said the seabed breaking ceremony project is “testimony to the strength” of the relationship between St. Kitts and Nevis and Canada.

President and CEO of the Canadian Commercial Corporation (CCC), Mr. Martin Zablocki, who also attended Tuesday’s landmark ceremony, echoed similar sentiments and stated that “Canada and St. Kitts have enjoyed relations for many years and this project will be a tangible example of this relationship for many, many years to come.”