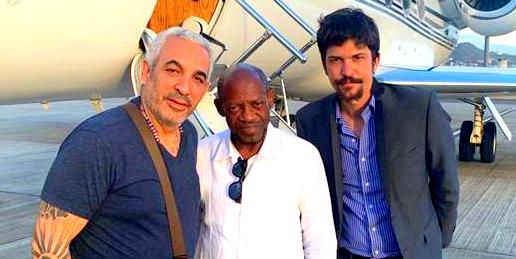 Controversial St.Kitts-Nevis Opposition Leader Dr. Denzil Douglas is yet again caught in the midst of controversy this time with the arrest of a  Billionaire Cannabis investor from California.

The California businessman came to St. Kitts last week just days after announcing that he was heading to the island to launch a Cannabis cultivation business on some 300 acres of land . Alki David boasted in a press release that he had discussion with farmers and St.Kitts Opposition Leader Dr. Denzil Douglas to cultivate 300 acres of Cannabis for export. The release stated that David was on his way to the island with a plane load of Hemp seeds to begin cultivation on the island .

However upon his arrival he was detained and then released after the intervention of Dr. Denzil Douglas according a media statement. David, however ,  was eventually arrested and charged some days later  on three warrants for drug importation, possession and intent to supply.

St. Kitts and Nevis police said that Alkivaides “Alki” David was arrested on May 9 and appeared in court the following day. He was released on cash bail of $30,000, $50,000 in two sureties, ordered to surrender all travel documents and ordered to report to Frigate Bay police station daily.

David said he has been helped so far by Opposition Leader Dr. Denzil Douglas but was “also aligning myself with other great people here as well.”

Douglas’ involvement with the David has raised many eyebrows and also raised many questions regarding why the opposition leader would seek to partner with the businessmen in a proposed venture that is not only not yet decriminalized on St.Kitts but also a venture that will be to the disadvantage of Nationals who have been lobbying for updates in the law to allow for the legal cultivation of cannabis to enable the development of a thriving Cannabis Industry. The facilitation of or the promise of some 300 acres of lands to the foreign investors has resulted in widespread condemnation of the Opposition Leader.

“This 300-500 acres that has been spoken about by these investors should be concerning to us all in St.Kitts-Nevis. Here we go again seemingly giving away our patrimony to foreigners. And again Dr. Denzil Douglas is at the center and entangled in the middle of it all. Douglas seems to care nothing about safeguarding our lands and is obviously quite comfortable with just giving away our lands to foreigners. He acquired over 500 acres from a National at the Peninsula to give to the foreign developers at Christophe Harbour. He essentially gave away over 1200 acres in the infamous Land for Debt swap. Local land ownership has always been a major issue for St.Kitts-Nevis nationals and Douglas’ latest entanglement in this facilitation of the hand over or the promise of these  hundreds of acres of lands to foreign investors indicates his continued disregard for the country’s patrimony,” said a Concerned Citizen.